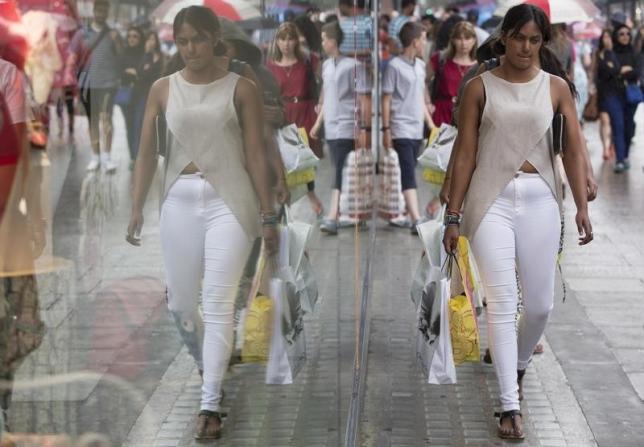 LONDON - British shop prices fell more sharply in July than the month before, due partly to bigger discounts on clothes, the British Retail Consortium said on Wednesday. The BRC said shop prices in July were 1.4 percent lower than a year earlier, compared with a 1.3 percent decline in June. "Clothing retailers were keen to shift their summer stock with widespread discounts clearly part of their strategy," BRC Director General Helen Dickinson said, pointing to a year-on-year fall of 4.9 percent. Food prices rose 0.1 percent on the year -- the first increase in seven months -- after a 0.4 percent fall in June. The BRC said July's increase was a blip, driven by higher prices for bread and alcohol. Britain's broader official measure of inflation, the consumer prices index, showed its first year-on-year fall in prices in over 50 years in April, and stood at zero in June, but few economists see a risk of entrenched deflation. The Bank of England is due to publish new forecasts for growth and inflation on Thursday. In the short-term at least, these are likely to point to a slower pick-up in inflation than the BoE forecast in May, reflecting greater strength in sterling and more persistent weakness in oil prices. -Reuters