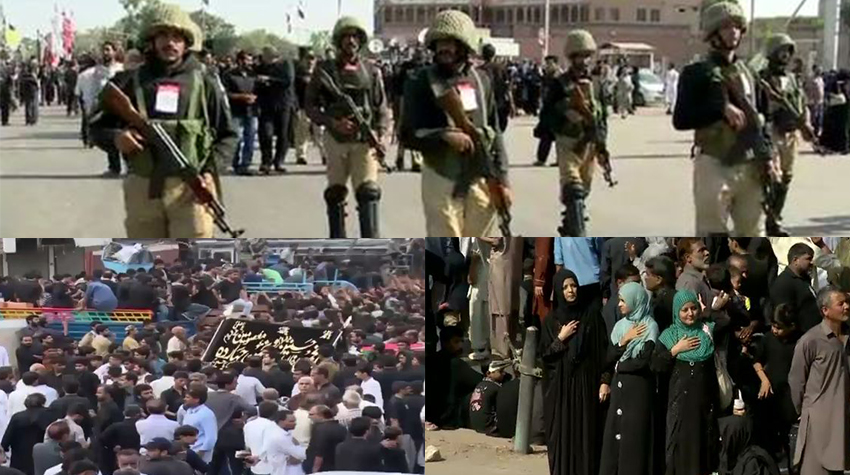 LAHORE/KARACHI (92 News) – The Chehlum of Hazrat Imam Hussain (RA) and his companions was observed throughout the country today with religious solemnity and respect. Mourning processions were being taken out in all big or small cities and towns of the country including Lahore, Karachi, Peshawar, Quetta and Rawalpindi to pay homage to the great sacrifice rendered by Hazrat Imam Hussain (RA) and his companions in Karbala. Strict security arrangements have been made on the occasion. The procession in Karachi was taken out from Ancholi which culminated at Husainia Kharadar. The processions were taken out in Hyderabad, Sukkur, Rohri, Ghotki and other cities. About 17,900 police personnel were deployed along procession routes with walkthrough gates at different points to check mourners. Several cities have been declared most sensitive and the security is on high alert, while the mobile service has been restricted on the routes of the procession. Stringent security measures have been made in several cities across the country including Karachi, Lahore, Faisalabad, Gujranwala, Sialkot, Jhang, Bhakkar, Multan, Sahiwal and Bahawalpur. On the other hand, the routes of the procession have been sealed by erecting barriers, while Peshawar has also been declared sensitive. According to the police officials of the Sindh, the security forces are on high alert to meet any untoward incident. Pillion riding has been banned in Karachi as a security measure for the Chehlum of Hazrat Imam Hussain (RA).