Chelsea and Bayern close in on titles 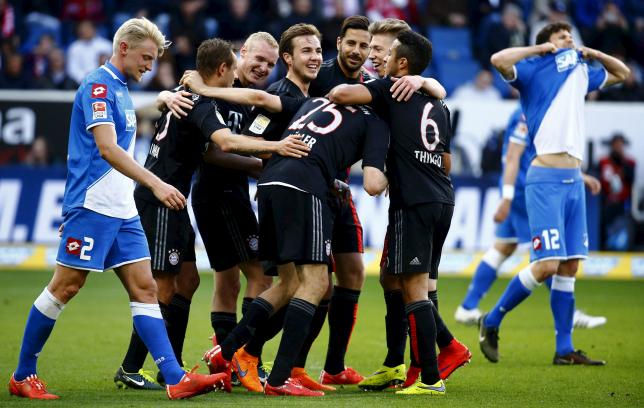 Chelsea and Bayern close in on titles

LONDON – Chelsea moved within touching distance of a first Premier League title in five years with a 1-0 win over Manchester United while Lionel Messi reached a landmark with his 400th career goal for La Liga leaders Barcelona. Bayern Munich are closing in on the Bundesliga title with weeks to spare while PSV Eindhoven wrapped up their first Dutch championship since 2008 and Olympiakos Piraeus celebrated winning the Greek Super League in style. ENGLAND Chelsea are two wins from the Premier League title after a 1-0 home victory against third-placed Manchester United left Jose Mourinho's side 10-points ahead of second-placed Arsenal. Chelsea, who have 76 points from 32 matches, can clinch the crown if they beat Arsenal, who edged Reading 2-1 after extra time in the FA Cup semi-final at Wembley, next weekend and win their game in hand against Leicester City. United, whose run of six straight league wins came to an end despite having dominated the game against a defensive Chelsea, remain third on 65 points with rivals Manchester City a point behind after a 2-0 home win over West Ham United. Aston Villa will play Arsenal in the FA Cup final at Wembley on May 30 after a surprise 2-1 win against Liverpool. SPAIN Lionel Messi struck his 400th goal for La Liga leaders Barcelona to seal a 2-0 victory over Valencia that keeps them two points ahead of Real Madrid who beat Malaga 3-1. Luis Suarez put Barca ahead inside a minute but Valencia did not cave in and Dani Parejo had a penalty saved by Barca keeper Claudio Bravo before Messi fired home late in stoppage time. Sergio Ramos, James Rodriguez and Cristiano Ronaldo all scored for Real but the win came at a cost with injuries for Gareth Bale and Luka Modric, who may be out for the season. A brace by Antoine Griezmann helped Atletico Madrid to a 2-1 victory over Deportivo La Coruna that sees them go four points clear in third after Valencia’s defeat. GERMANY Bayern Munich shrugged off injuries and their 3-1 Champions League loss at Porto in midweek to beat Hoffenheim 2-0 and come within touching distance of the Bundesliga title. The Bavarians are on 73 points, 12 ahead of second-placed VfL Wolfsburg, who drew 1-1 against Schalke 04, with five games left. They will win the title if they increase their lead next week. Bayer Leverkusen crushed Hanover 96 4-0 to move up to third, level with fourth-placed Borussia Moenchengladbach on 54 points. Last season's runners-up Borussia Dortmund kept their slim European hopes alive with a 3-0 victory over Paderborn to move up to ninth, six points off the last Europa League spot. ITALY AS Roma wasted a golden chance to regain sole possession of second place in Serie A as they were held to a 1-1 home draw by relegation-threatened Atalanta. That allowed 10-man Napoli to move within six points of Roma and second-placed Lazio, who are 15 behind champions-elect Juventus, by crushing lowly Cagliari 3-0 for their first away win in over two months. Inter Milan and AC Milan played out a 0-0 draw which further hit their hopes of qualifying for Europe next season. Milan are ninth, one place and a point ahead of their neighbours and six adrift of sixth-placed Fiorentina, who play on Monday, in the last Europa League qualifying spot. FRANCE Olympique Lyonnais went top of Ligue 1 with a 2-2 home draw against St Etienne after being reduced to 10 men in the first half. Lyon, who had Lindsay Rose dismissed for handball in the box, have 65 points from 33 games and lead Paris St Germain on goal difference. PSG, who beat Nice 3-1 away with a Javier Pastore double, have a game in hand. Monaco, on 59 points, are third after a 1-1 draw against Stade Rennes, while Olympique de Marseille (57) slipped to fourth after a 1-0 defeat at Nantes. NETHERLANDS PSV Eindhoven beat Heerenveen 4-1 to win the Dutch championship for the first time in seven seasons. The victory put them on 79 points and beyond the reach of second-placed Ajax Amsterdam, who have lost their title after four successive years as champions. It is a 22nd league championship for PSV, who are second only to Ajax (33 titles) in the Netherlands. GREECE Olympiakos Piraeus celebrated wrapping up the Super League title with three matches to spare by thrashing visitors Levadiakos 4-0 to claim their 42nd championship. Vitor Pereira’s team had already secured their fifth domestic title in a row after title rivals Panathinaikos suffered a shock 2-1 defeat at Panthrakikos. That result saw Panathinaikos drop to third place on 59 points and meant Olympiakos, who went into the weekend knowing a point would deliver the title, moved 10 points clear of second-placed PAOK Salonica before their match with Levadiakos. –Reuters