Chelsea take over at the top by beating 'Boro 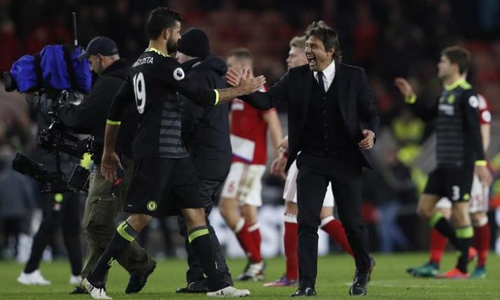 Chelsea take over at the top by beating 'Boro

MIDDLESBROUGH- Chelsea replaced Liverpool at the top of the Premier League with a comfortable 1-0 win at Middlesbrough thanks to a first-half Diego Costa strike on Sunday. It was the London side's sixth successive league victory without conceding a goal and put them on 28 points from 12 games, a point ahead of the Merseyside club and Manchester City. The league's leading scorer, Costa, hit his 10th goal of the season to put them in front four minutes before the break. 'Boro, promoted last season, found it hard to make any clear opportunities against a solid Chelsea defence and remain in the bottom six, one point clear of the relegation places. Despite starting brightly, the hosts struggled against the 3-4-3 system that has brought the west London side such success since manager Antonio Conte introduced it at the start of October following a 3-0 defeat by Arsenal. Eden Hazard, who has rediscovered the form that made him Player of the Year in England two years' ago, prompted attacks from wide on the left and, with Victor Moses continuing to enjoy himself out on the right, Chelsea started creating chances. Moses, up against former Manchester United defender Fabio de Silva, shot wildly high but did better in setting up Pedro, whose goalbound shot was brilliantly touched over the bar by Victor Valdes. When Moses won another corner shortly before the interval, a clutch of 'Boro defenders failed to clear the ball and Costa reacted faster than any of them to volley home. FINE SAVE It took a fine save by Valdes to prevent another goal within 25 seconds of the second half. He parried Marcos Alonso's low drive and Calum Chambers scraped the loose ball to safety. Gaston Ramirez put a rare Middlesbrough chance too high from 20 metres before Pedro was denied what would have been a stunning Chelsea goal. Costa headed down David Luiz's perfectly flighted diagonal cross and his fellow Spanish international Pedro crashed a shot against the bar. 'Boro manager Aitor Karanka, appointed three years ago this week, tried in vain to change things with a double substitution, although Alvaro Negredo was unfortunate with a clever volley that forced Chelsea's Thibaut Courtois into his first real save of the game 12 minutes from the end. "We knew it was going to be hard but we are in the Premier League and one mistake gets you punished," Karanka said. Middlesbrough have now lost their last seven league and cup games against the London side without scoring and have not beaten them since 2006. "Confidence and spirit are up and we are playing well," Chelsea defender Gary Cahill told Sky Sports. "We are getting the results too which is the most important thing. We have carried on from where we left off at the international break. "We are happy with today's work, but the league is not won today. It is not even Christmas yet." -Reuters