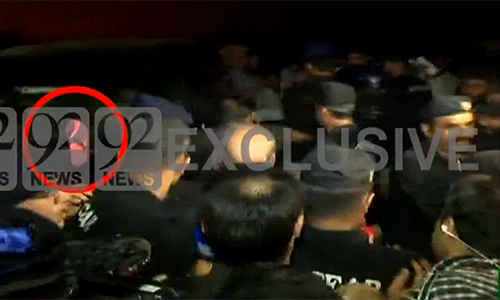 KASUR (92 News) – Violent protesters hurled a shoe at IGP Punjab Mushtaq Sukhera and besieged his car after the press conference in Kasur on Tuesday. During the press conference, the protesters chanted slogans against the police and demanded stern action against responsible officers. Addressing a press conference after meeting the victims and their parents on Tuesday, IGP Punjab Mushtaq Sukhera has claimed that no influential person is involved in protecting the accused. “The nation is ashamed of the incident. Such incidents are a source of shamefulness in our society. We will try our best to bring the culprits to justice,” he maintained. The IGP Punjab assured the victims’ parents that all-out help would be extended to them if they faced any problem. He said that the Ganda Singhwala SHO had been removed for irresponsible attitude. Meanwhile, the Punjab government has made Additional IG Special Branch Dr Arif Mushtaq Chaudhry as officer on special duty (OSD) on the charge of distorting the Kasur child abuse scam. Kasur DPO Rai Babar, DSP and DSP Special Branch have also been made OSDs.