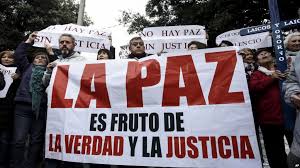 SANTIAGO (Reuters) - Chile’s national prosecuting authority said on Wednesday that it had asked the government to submit a formal request to the Vatican for information about nine clergymen and lay workers who have been accused of sexual abuse of children. The prosecuting authority said in a statement that national prosecutor Jorge Abbott had asked the foreign minister to enact three International Legal Assistance in Criminal Matters requests in relation to cases from the capital Santiago, the city of Valparaiso and the southern region of Araucania. It said it could submit additional requests in the future. “The document was sent confidentially through the Unit of International Cooperation and Extraditions of the National Prosecutor’s Office to Chile’s Ministry of Foreign Affairs so that it can send the referral to the Vatican through diplomatic channels,” the prosecutor’s office said. Chilean authorities have raided a number of Roman Catholic Church offices in Chile as part of investigations into accusations by prosecutors and victims groups that Church authorities covered-up or failed to properly investigate abuse.
The prosecutor’s office said on Wednesday that it was investigating 38 accusations of sexual abuse against 73 bishops, clerics and lay workers in the Roman Catholic Church, involving 104 victims, most of whom were underage at the time of the alleged abuse.