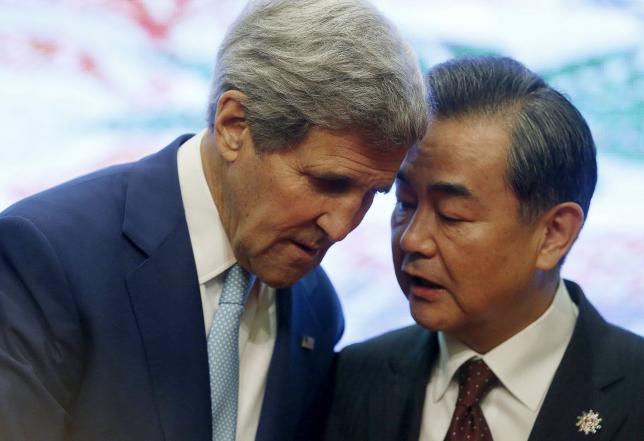 BEIJING - Japan and the Philippines teamed up at a regional security forum this week to attack China over the disputed South China Sea, China's Foreign Ministry said, as details emerged of sometimes testy exchanges during the talks in Malaysia. In a statement released around midnight, the ministry cited Chinese Foreign Minister Wang Yi as telling the East Asia Summit on Thursday that Beijing was not impeding freedom of navigation in the contested waterway. U.S. Secretary of State John Kerry told the forum that China was restricting navigation and overflights. Kerry also said China's construction of facilities for "military purposes" on man-made islands in the South China Sea was raising tensions and risked "militarization" by other claimant states. China claims most of the South China Sea, through which $5 trillion (3 trillion pounds) in ship-borne trade passes every year. The Philippines, Vietnam, Malaysia, Taiwan and Brunei also have overlapping claims. The Chinese statement made no mention of Kerry or his criticism at the meetings in Kuala Lumpur, where discussion was dominated by China's creation of seven artificial islands in the Spratly archipelago of the South China Sea. But it said Philippine Foreign Minister Albert del Rosario "attacked" China's South China Sea policy, and received support from his Japanese counterpart. Japan has boosted security cooperation this year with some of the claimants at loggerheads with China, in particular the Philippines. Tokyo has no claims in the waterway, but is worried Beijing's new islands will extend Chinese military reach into sea lanes through which much of Japan's ship-borne trade passes. "China opposes any non-constructive words and acts which widen division, exaggerate antagonism or create tensions," the statement cited Wang as telling the forum, which was attended by foreign ministers from around the region. SPAT OVER LEGAL CASE One diplomat inside the meeting room told Reuters that China was angered when del Rosario outlined in detail a legal case that Manila filed against Beijing at an international court in The Hague. The case, which opened last month, concerns what Manila sees as its right to exploit natural resources and fish in the South China Sea. China has refused to take part. Among other things, del Rosario said China had "irreversibly" damaged the regional marine environment through its reclamation and creation of islands in the Spratlys, according to a copy of his speech. Wang told the meeting that "China cannot accept the results of any arbitration". "The Philippines did not inform the Chinese side in advance, nor did it seek China's consent and has initiated unilateral arbitration forcefully," Wang said, urging the Philippines to resolve the dispute through negotiation. Del Rosario said the outcome of the arbitration process would contribute to a peaceful and long-term resolution of overlapping maritime jurisdictions in the South China Sea. Turning to Tokyo, Wang told the forum that Japan had built up a remote island in the Pacific called Okinotori to enforce Japanese territorial claims. China has previously refused to recognise Tokyo's claims to an exclusive economic zone around Okinotori, which lies about halfway between Guam and Taiwan, 1,700 km (1,050 miles) from Tokyo. It is also known as Douglas Reef or Parace Vela. "Before criticising others, Japan must first take a good look at its own words and behaviour," Wang said. Chinese reclamation and building work on its islands in the South China Sea were to improve living conditions and provide facilities like lighthouses and weather stations, he added. China has also said they would have undefined military purposes. In separate talks with Japanese Foreign Minister Fumio Kishida on Thursday, Wang urged Tokyo to stop "grappling with China in all respects". "Japan should put into practice its promise that China and Japan are cooperation partners," the official Xinhua news agency cited Wang as saying. Sino-Japanese ties have long been strained over territory in the East China Sea and over what Chinese leaders say is Japan's failure to atone for its wartime occupation of parts of China. Japanese media said Kishida told Wang that China should refrain from unilateral gas development in the East China Sea. -Reuters