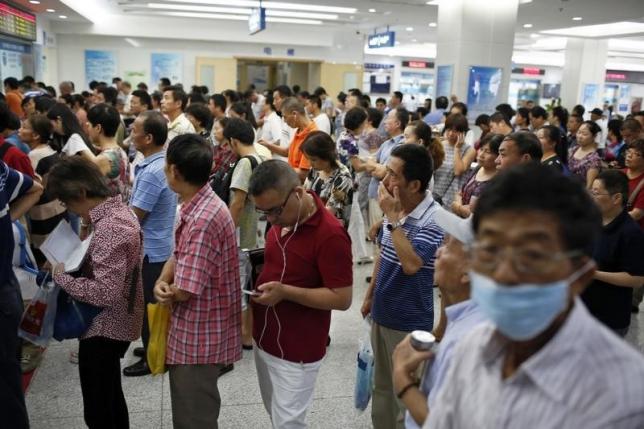 SHANGHAI - China will almost double the number of its general doctors by 2020, trim its public sector and improve technology as it seeks to fix a healthcare system plagued by snarling queues and poor rural services, its main administrative authority has said. China's fast-growing healthcare market is a magnet for global drug makers, medical device firms and hospital operators, all looking to take a slice of a healthcare bill expected to hit $1 trillion by 2020, according to McKinsey & Co. "Healthcare resources overall are insufficient, quality is too low, our structures are badly organized and service systems fragmented. Parts of the public hospital system have also become bloated," China's State Council said in a five-year roadmap announced late on Monday. The roadmap, which laid out targets for healthcare officials nationwide between 2015 and 2020, said Beijing wanted to have two general doctors per thousand people by 2020, close to double the number at the end of 2013, as well as increasing the number of nursing and support staff. China suffers from a scarcity of doctors - partly caused by low salaries - which has created bottlenecks at popular urban hospitals leading to rising tension between medical practitioners and often frustrated patients. The roadmap said China would also look to use technology such as mobile devices and online "cloud systems" to meet some of the issues, a potential boost to tech firms like Alibaba Group Holding Ltd and its healthcare subsidiary Alibaba Health Information Technology Ltd. China should also have digital databases for electronic health records and patient information covering the entire population to some degree by 2020, it said. Providing access to affordable healthcare is a key platform for President Xi Jinping's government. However, recent probes have turned the spotlight on corruption in the sector, while patients often have large out-of-pocket expenses due to low levels of insurance coverage. The roadmap said China would push forward the development of grassroots healthcare, a fast-growing business segment, while reining in some large public hospitals in urban centers. The document also suggested further opening to the private sector, where Chinese and international firms have been taking a growing role in running hospitals. "The role of public health institutions is too big, with the number of beds accounting for around 90 percent of the total," the State Council said. - Reuters