China, Bangladesh, India most at risk from river floods 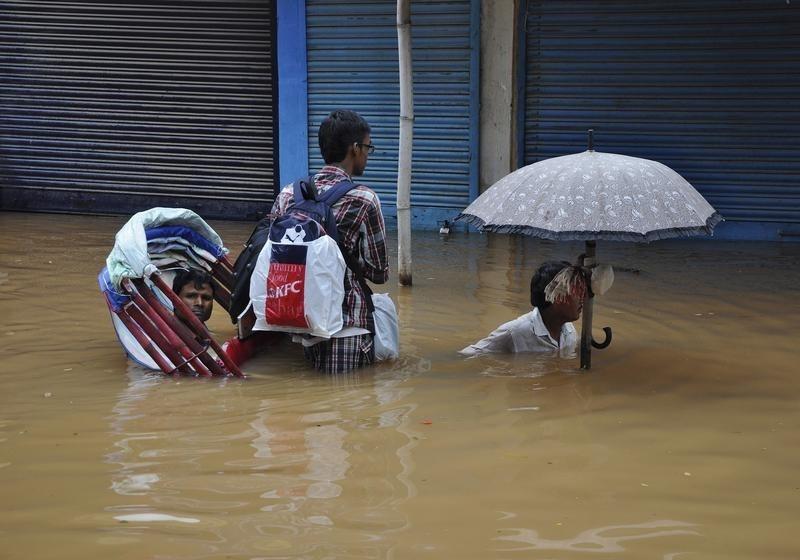 China, Bangladesh, India most at risk from river floods

OSLO (Reuters) - China, Bangladesh and India are most at risk from river floods, with an increasing number of people threatened because of climate change and economic growth in low-lying regions, a study said on Friday. The US-based World Resources Institute think-tank and four Dutch research groups estimated that some 21 million people worldwide were affected by river flooding in a typical year. "That number could increase to 54 million in 2030 due to climate change and socio-economic development," their report said. People living in 15 emerging nations, led by India, Bangladesh, China, Vietnam and Pakistan, accounted for almost 80 percent of all those affected by floods in an average year, it said. In India alone, almost five million people were at risk. The United States had 167,000 people exposed to floods in a average year, the most for any developed nation, putting it 18th on a ranking of more than 160 nations. The UN panel of climate scientists said last year that global warming would lead to more risks of floods, heatwaves, storms, downpours, landslides, air pollution, water scarcity, sea level rise and storm surges. Thursday's study estimated that $96 billion of annual global gross domestic product was exposed to river floods every year, led by India on $14 billion and Bangladesh on $5.4 billion. This amount could rise to $521 billion by 2030. it said. "There will be a huge increase in risk, especially in South East Asia," Hessel Winsemius, an author of the study at Dutch independent research institute Deltares, told Reuters. Such flooding can also impact multinational companies which spread their production capacity -- monsoon floods in Thailand in 2011 killed more than 800 people and closed many factories -- including some making parts for firms such as Intel and Apple. Many cities on flood plains were expected to expand in coming years, putting more people and businesses at risk. Multinational companies should think more about flood risks, including back-up suppliers or insurance from vulnerable areas. Developing nations are working to adapt. Thailand, for instance, is experimenting with floating homes that can rise up above the waters on pontoons filled with styrofoam.