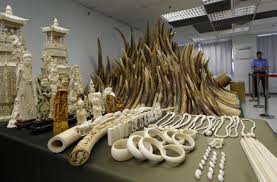 SHANGHAI (Reuters) - China has announced a one-year ban on the import of African ivory carvings ahead of next week's visit by Britain's Prince William, a strong critic of the ivory trade. China will halt approval for imports until late February next year, newsagency Xinhua reported on Thursday, citing the State Forestry Administration, which regulates the trade. The ban will affect carvings acquired after 1975, it added. Prince William has previously been critical of China over its consumption of ivory, while animal rights groups say the country's growing appetite for the contraband material has fuelled a surge in poaching in Africa. "The move is to protect African elephants, and the one-year timeframe is designed to assess the effects," Xinhua said. China crushed 6.2 metric tonnes (6.83 tons) of confiscated ivory early last year in its first such public destruction of any part of its stockpile. However, the country still ranks as the world's biggest end-market for poached ivory according to conservation body the World Wildlife Fund. China signed a pact banning global trade in ivory in 1981, but it got an exemption in 2008 to buy 62 tonnes of ivory from several African nations. It releases a portion of that stockpile each year to government-licensed ivory carving factories. Over 20,000 African elephants were killed for ivory in 2013, a Convention on International Trade in Endangered Species (CITES) monitoring program showed, leaving a population believed to be around 500,000.