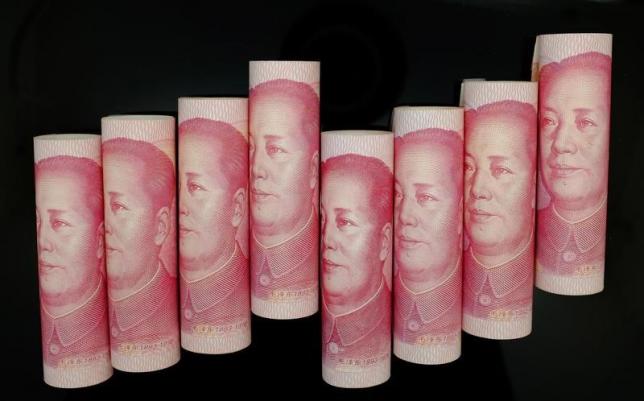 SHANGHAI - China devalued the yuan on Tuesday after a run of poor economic data, guiding the currency to its lowest point in almost three years in a move it billed as free-market reform. The central bank described it as a "one-off depreciation" of nearly 2 percent, based on a new way of managing the exchange rate that better reflected market forces, but economists said the timing suggested it was also aimed at helping exporters. Data released at the weekend showed that China's exports tumbled 8.3 percent in July, hit by weaker demand from three huge trading partners - Europe, the United States and Japan. "We think the move is aimed to ease pressure on China's weak exports performance in recent months and relieve imported deflation pressure," said Guo Lei, economist at Founder Securities in Shanghai. The world's second-largest economy has slowed markedly this year and some economists believe it is expanding at much less than the official 2015 target of 7 percent. Even if it meets the target, growth will come in at a 25-year low. "Since China's trade in goods continues to post relatively large surpluses, the yuan's real effective exchange rate is still relatively strong versus various global currencies, and is deviating from market expectations," the central bank said. "Therefore, it is necessary to further improve the yuan's midpoint pricing to meet the needs of the market." China manages the exchange rate through an official midpoint, from which it can vary 2 percent each day. On Tuesday, the People's Bank of China (PBOC) said it was now basing the midpoint CNY=SAEC on market makers' quotes and the previous day's closing price. The bank then weakened the midpoint to 6.2298 per dollar on Tuesday morning, compared with Monday's 6.1162 fix - the biggest-ever one-day adjustment to the midpoint. In the past, the central bank set the midpoint using formula based on a basket of currencies, but the methodology has never been publicised and many believed that in practice the midpoint was frequently used as a way to bend the market to policy goals. Under the new method, market forces would have more ability to take the yuan lower in the weeks ahead, raising the possibility of competitive currency depreciations world-wide. However, Beijing would still have a large say in setting the new midpoints, given the heavy influence of state banks in daily trade of the yuan. GLOBAL CURRENCY JITTERS The Australian dollar lost 1 percent against the dollar on China's devaluation, and the South Korean won also lost ground, though traders suspected authorities in Seoul were selling dollars to smooth that currency's fall. But talk of a global currency war was mooted. "What is really important is for markets to observe where the renminbi really goes over the next few days to see whether this is indeed a one-off adjustment or a sustained trend," said Vishnu Varathan, economist with Mizuho Bank in Singapore. Tuesday's move marks a retreat from China's strong-yuan policy, which had been designed to support domestic demand, help Chinese firms to borrow and invest abroad, and encourage foreign firms and governments to make greater use of the currency. Until Tuesday, yuan volatility had vanished and traders suspected that the PBOC, with state-owned banks, had been propping up the currency against depreciation pressure. It had been locked in an extremely narrow intraday range since March, with rates varying over a range of only 0.3 percent. On Tuesday, the spot yuan price touched its weakest point since September 2012 in early trade. In addition to the weak export data, China also reported a continuing slide in producer prices at the weekend to a near six-year low in July, increasing the pressure on manufacturers. However, one economist doubted Beijing was reacting only to the weak data and said the move was part of its reform agenda to help the yuan become an international reserve currency. "I don't think this is a reaction to the weak trade data over the weekend, I think it's because of the SDR," said Zhou Hao of Commerzbank AG in Singapore, referring to Beijing's push for the yuan to be included in a basket of reserve currencies known as Special Drawing Rights (SDR), which are used by the International Monetary Fund to lend money to sovereign borrowers. The Chinese government "needs to have a market-based mechanism and it needs volatility," he said. The IMF proposed in a report this month to put off any move to add the yuan to its benchmark currency basket until after September 2016, and it gave mixed reviews of Beijing's progress in making key financial reforms to its currency market. - Reuters