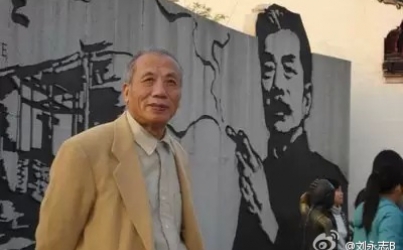 BEIJING (Reuters) - A Chinese court on Wednesday sentenced an 81-year-old writer to jail on a charge of illegal business after he criticised the ruling Communist Party's propaganda chief in online essays, but the sentence was suspended, his lawyer said. The conviction of Huang Zerong, who is better known by his pen name Tie Liu, is the latest example of a government campaign to tighten control over the media, political dissidents and the Internet. Huang spent nearly 25 years in labour camps for criticising former leader Mao Zedong and the party, rights groups say. He was sentenced to two-and-a-half years in prison on a charge of "illegal business activity" and fined 30,000 yuan ($4,800) after he pleaded guilty in a court in Chengdu city, his lawyer, Liu Xiaoyuan, told Reuters by telephone. The sentence was suspended for four years, allowing Huang to stay out of prison if he does not break the law, Liu said. Huang, who is in poor health, would be released on bail later on Wednesday, Liu said. Court officials in Chengdu declined to comment. More than 30 supporters turned up outside the court intending to protest but were told by Huang's family not to do so, one of them said. "Obviously, this case doesn't revolve around illegal business activity," said one of the supporters, Chen Yunfei. "He should not be guilty of speech. The constitution says we have freedom of expression, so this trial is a violation of free speech." The court also handed down a suspended one-year sentence to Huang's assistant and housekeeper, Huang Jing. Last year, police in Beijing charged Huang with "causing a disturbance" in connection with 11 of his essays, the lawyer, Liu, said. Six of the essays were critical of Liu Yunshan, the Politburo Standing Committee member who oversees propaganda, the lawyer said. In an August essay on an overseas Chinese news website Boxun, Huang accused Liu Yunshan of "never having done a single good thing" for the country and its people. Liu Yunshan was not available for comment. In September, the PEN American Center free-speech group called Huang's arrest and detention "an outrageous example of Beijing's 65-year campaign against free expression, prioritising the image of the Party over the rights of the people".