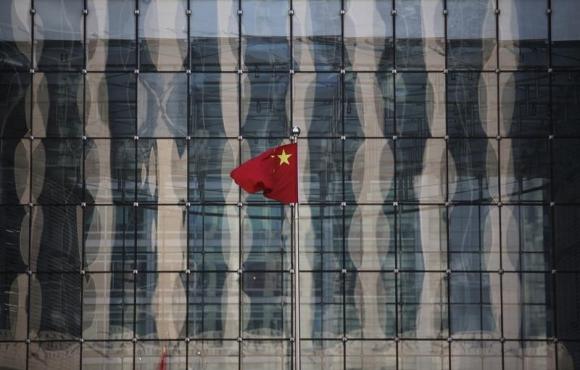 BEIJING (Reuters) - China's central bank cut interest rates on Saturday, just days before the annual meeting of the country's parliament, in the latest effort to support the world's second-largest economy as its momentum slows and deflation risks rise. The central bank said the 25 basis point cut in the benchmark interest rate to 5.35 percent - its second cut in just over three months - and a 25 basis point cut in the benchmark saving rate to 2.5 percent would be effective from Sunday. "The focus of the interest rate cut is to keep real interest rate levels suitable for fundamental trends in economic growth, prices and employment," the People's Bank of China (PBOC) said in a statement on its website. "This does not represent a change in the direction of monetary policy." However, using new language to describe the policy setting, the PBOC said the latest rate cut would create a "neutral and appropriate" monetary environment for China. The move came four weeks after the bank had lowered the level of cash banks must set aside as reserves, known as the reserve requirement ratio or RRR, leading some to believe the PBOC was growing increasingly worried about deflationary risk. The reference to "real interest rates" in Saturday's statement also implied that sliding prices were an important factor in its decision. An article in the central bank's official newspaper on Feb. 25 had warned that deflationary risks were higher than many thought. "The rate cut happened in the first week after the Lunar New Year holiday, underscoring the government's hope to boost corporate confidence," said Li Huiyong, an economist at Shenyin & Wanguo Securities in Shanghai. "Deflation is the top enemy. Only through continuous easing (rate and RRR cuts), we can ease the vicious cycle of economic contraction." Globally around 20 central banks have eased policy this year to counter deflationary pressures driven in part by the plunge in oil prices. REDUCING REAL RATES In its last round of rate cuts in November, the PBOC reduced one-year benchmark lending rates by 40 basis points to 5.6 percent and lowered one-year benchmark deposit rates by 25 basis points to 2.75 per cent. Beijing has been trying to stimulate investment to reinvigorate an economy that expanded at its slowest rate for 24 years in 2014, but it is questionable whether the cuts alone will be able to revive appetite for productive investment. That might not be the primary goal of this cut, said Andrew Polk, economist at the Conference Board in Beijing. He and other economists pointed out that many Chinese companies are carrying staggering debt burdens, so allowing them to refinance at lower rates is seen as a way to put more cash in their pockets. "I think most of the loan demand is still pretty weak, so what this does is (to) lower primarily the cost of financing for people who can borrow at the benchmark; the big state borrowers and local governments, those heavily indebted entities," Polk said. "But it's not likely to spur private sector borrowing." The surprise interest rate cut in November, followed up by a February reduction in the RRR that poured fresh cash into the financial system, had little apparent effect on business confidence, although the liquidity was welcomed by the stock market. China's annual consumer inflation hit a five-year low in January while factory deflation worsened, underscoring deepening weakness in the economy. Export and import growth had also tanked in the same month, performing worse than expected. Although January and February data is considered unreliable due to the week-long lunar new year festival holiday, most economists predicted the central bank would have to follow up with further cuts to guidance lending rates and the RRR this year if it wanted to gain policy traction. Deflationary cycles, once entrenched, can stall investment for years or even decades, as the case of Japan highlights, and is considered a nightmare scenario by many economists in China. "The economy is unlikely to stabilise immediately after the rate cut," wrote Minsheng Securities economists in a research note reacting to the news. "Expectations of loose monetary policy and renminbi depreciation will persist." China is due to release official factory and services Purchasing Managers' Index surveys for February on Sunday, the last data release before the National People's Congress, the rubber-stamp legislature, convenes next week.