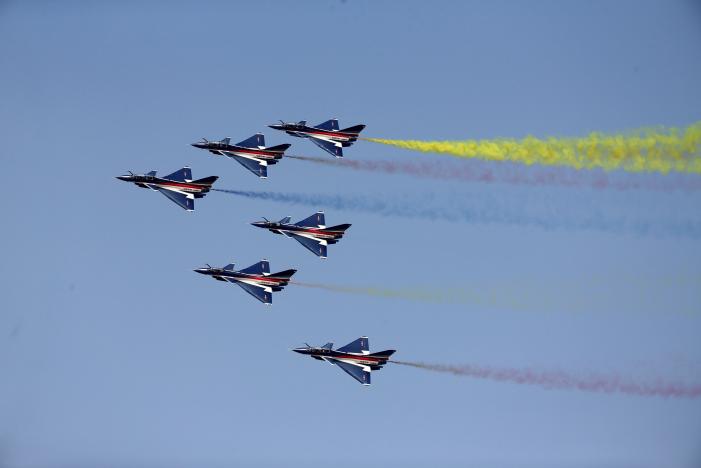 ZHUHAI, CHINA – China showed its Chengdu J-20 stealth fighter in public for the first time on Tuesday, opening the country's biggest meeting of aircraft makers and buyers with a show of its military clout. Airshow China, in the southern city of Zhuhai, offers Beijing an opportunity to demonstrate its ambitions in civil aerospace and to underline its growing capability in defense. China is set to overtake the U.S. as the world's top aviation market in the next decade. Two J-20 jets, Zhuhai's headline act, swept over dignitaries, hundreds of spectators and industry executives gathered at the show's opening ceremony in a flypast that barely exceeded a minute, generating a deafening roar that was met with gasps and applause and set off car alarms in a parking lot. Experts say China has been refining designs for the J-20, first glimpsed by planespotters in 2010, in the hope of narrowing a military technology gap with the United States. President Xi Jinping has pushed to toughen the armed forces as China takes a more assertive stance in Asia, particularly in the South China and East China seas. "It is clearly a big step forward in Chinese combat capability," said Bradley Perrett of Aviation Week, a veteran China watcher. State-owned Commercial Aircraft Corporation of China (COMAC) was also bullish on China's appetite for new civilian planes, estimating the market would need 6,865 new aircraft worth $930 billion over the next 20 years. The COMAC forecast - similar to long-term outlooks from well-established rivals Boeing Co and Airbus Group - said China would make up almost a fifth of global demand for close to 40,000 planes over the next two decades. – Reuters