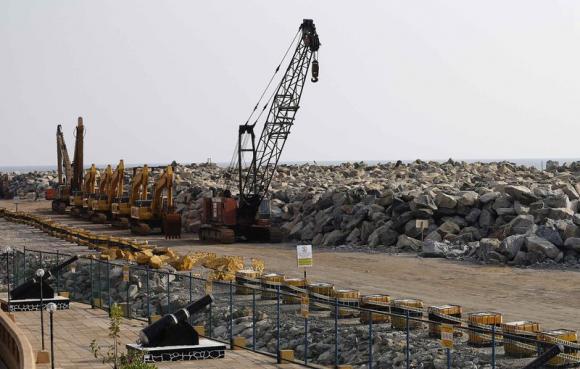 BEIJING - Sri Lanka's suspension of a project to build a glittering skyline on land reclaimed from the Indian Ocean has prompted China to defend its investment, in a test of Beijing's ambitions to fund loans and major infrastructure ventures abroad. Recently elected President Maithripala Sirisena has vowed to look again at deals between China and his predecessor Mahinda Rajapaksa, saying they were not transparent, while India has eyed China's involvement in Sri Lanka with increasing alarm. China's new ambassador to Colombo, Yi Xianliang, said the port city project off Colombo that President Xi Jinping inaugurated last year would create 83,000 jobs. "Such a port city ... will be of great significance for Sri Lanka's economic development, attracting foreign investment and promoting local tourism," he told a small group of reporters earlier this week. His comments came days after Sri Lanka halted the $1.4 billion port project, citing lack of government approvals and raising the risk of a diplomatic row with its biggest investor. Yi also spoke in the week Colombo welcomes Narendra Modi, the first Indian prime minister to visit in 28 years as part of a drive to rebuild ties with smaller neighbours and counter China's rising influence in the Indian Ocean. Two Chinese officials, who were not authorised to speak to the press, said companies were unlikely to back down significantly if Sri Lanka demanded fresh terms. "If the Chinese firm changes the commercial agreement here because of government pressure, it will have to allow reviews of all its projects in other countries as well," said one Chinese official familiar with the port city dispute. LOANS UNDER SCRUTINY China has invested millions of dollars in Sri Lankan infrastructure since the end of a 26-year civil war in 2009, when Colombo was largely shunned by Western investors because of its human rights record. As well as the port, Sirisena's administration wants to renegotiate terms of an estimated $5 billion in Chinese loans, a move that could embolden other countries where China's state-backed firms have invested heavily. One of them related to the construction of Hambantota port in the south in which a $306 million loan was secured from China's Ex-Im Bank at a fixed interest rate of 6.3 percent. Yi said loan terms for Sri Lanka were reasonable and in line with those China extended to other countries, adding that financing was made available against the backdrop of the 2008 financial crisis. "At the request of the Sri Lankan government, China overcame the difficulties and increased financial support following the principle of mutual benefit." –Reuters