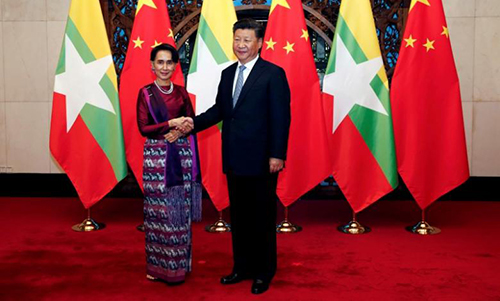 BEIJING – China's military wants to strengthen ties with neighboring Myanmar by having more exchanges and greater cooperation, a top officer told Myanmar leader Aung San Suu Kyi during a visit to the Southeast Asian country, state media said on Saturday. China has been on a diplomatic offensive ever since the Nobel Peace Prize laureate's government came to power in April, aiming to forge good ties with its resource-rich neighbor. Last month Suu Kyi visited China, where President Xi Jinping told her he wanted to ensure the "correct direction" of relations. Xu Qiliang, a vice chairman of China's Central Military Commission, which controls the armed forces and is headed by Xi, told Suu Kyi that China "highly values the friendly cooperation between the two countries", state news agency Xinhua said. "China firmly upholds a friendly policy towards Myanmar and supports Myanmar's national reconciliation process," Xu said during Friday's meeting in Naypyitaw, the capital of Myanmar. "Xu mentioned Aung San Suu Kyi's recent trip to China, during which she reached consensus with the Chinese leadership on further enhancing the comprehensive strategic cooperative partnership between China and Myanmar," it added. China will keep playing a constructive role in pushing forward Myanmar's peace process and hopes the two countries can work together to maintain peace and stability on their border, Xu said. Suu Kyi last month launched a major push to end decades of fighting between the military and myriad rebel groups, which has at times spilled into China and seen refugees pushed across the border, to Beijing’s anger. Enhancing friendship, mutual understanding and trust is very important for both nations, Suu Kyi said, according to Xinhua, and thanked China for its role in Myanmar's peace process.
China had a close relationship with Myanmar’s former military-run government, and has looked on with some nervousness at its democratization process.
China has been pushing Myanmar to resume work on the Chinese-invested $3.6-billion Myitsone dam project, 90 percent of whose power was originally planned to have gone to China. In 2011, then President Thein Sein angered China when he suspended work on the dam, at the confluence of two northern rivers in the Ayeyarwady river basin, over environmental protests. –Reuters