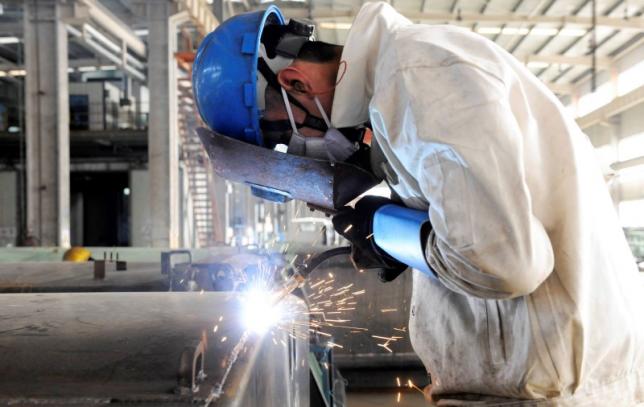 BEIJING - Activity in China's manufacturing sector unexpectedly shrank in July, an official survey showed on Monday, with small and medium-sized firms leading the fall and reinforcing fears that the economy may once again be losing momentum. The official Purchasing Managers' Index (PMI) eased to 49.9 in July, compared with the previous month's reading of 50.0 and below the 50-point mark that separates growth from contraction on a monthly basis. Analysts polled by Reuters predicted a reading of 50.0. After expanding for three consecutive months from March to May, growth in China's factory sector stalled in June, though economic growth slightly beat expectations in the second quarter after near-record credit expansion. Analysts say the economy has mostly steadied, but activity is increasing reliant on growing government spending and debt and many China watchers expected renewed weakness later this year. Industrial profits rose at the fastest pace in three months in June, but gains were concentrated in just a few industries including electronics, steel and oil processing. Factory output fell to 52.1 in July from 52.5 in June, and total new orders hovered just inside expansionary territory at 50.4, slightly down from June's 50.5, the PMI showed. New export orders contracted as overseas demand remains weak and the impact of Britain's vote to leave the European Union hurt sentiment, the National Bureau of Statistics said. Manufacturers continued to cut jobs, with the employment sub-index falling to 48.2, compared to 47.9 in June. Job losses could be rising as the government has pledged broad capacity cuts across a range of industries. Chinese officials admitted last week that they have cut less than a third of the excess steel capacity they had targeted for 2016, but will step up efforts in the second half of the year. A report on Wednesday by the National Academy of Development and Strategy at Renmin University in Beijing found 51.43 percent of listed steel firms surveyed could be classified as "zombie firms", non-viable enterprises that are still operating. A sub-index for smaller firms fell, while performance at larger companies improved, a sign that the government's dependence on big state firms for growth this year has not changed. A similar business survey showed activity in China's services sector expanded at a faster pace, with the official reading at 53.9 in July from 53.7 in June. A measure of the construction industry stood at 61.1, down from 62.0 in June but still pointing to solid expansion as the government goes on an infrastructure spending spree. Financial services rose but the property sector fell, as the real estate market began to cool following strong activity earlier in the year. The services employment sub-index fell again in July, indicating companies were cutting staff. Beijing has been counting on a strong services sector to pick up the slack as it tries to shift the economy away from a dependence on heavy industry and manufacturing exports. -Reuters