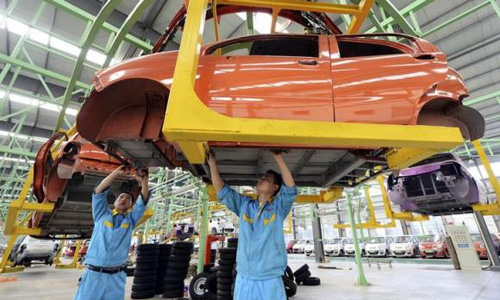 BEIJING (Reuters) - Activity in China's mammoth factory sector edged up to a four-month high in February but export orders shrank at their fastest rate in 20 months, a private survey showed, painting a murky outlook that argues for more policy support. The flash HSBC/Markit Purchasing Managers' Index (PMI) inched up to 50.1 in February, a whisker above the 50-point level that separates growth in activity from a contraction on a monthly basis. Economists polled by Reuters had forecast a reading of 49.5, little changed from January's final PMI of 49.7. But even as factory activity grew marginally, the survey suggested that manufacturers still faced considerable risks from weak foreign demand and deepening deflationary pressures. While domestic demand picked up slightly, the new export orders sub-index shed three hefty points from January to skid to 47.1, the sharpest rate of contraction since June 2013. "Domestic economic activity is likely to remain sluggish and external demand looks uncertain," said Qu Hongbin, HSBC's chief economist in China. "We believe more policy easing is still warranted at the current stage to support growth." Input and output prices also fell. Though prices did not drop as sharply as they did in January, the trend pointed to further pressure on companies' profitability. Employment in factories shrank as well for the 16th straight month as firms dismissed workers to adjust to slower business. The Australian dollar and emerging Asian currencies extended early gains after the PMI report, though shares in China .CSI300 and Hong Kong .HSI remained slightly lower. Although the PMI is supposed to be adjusted for seasonal fluctuations in activity, including over the long Lunar New Year holiday when thousands of factories are shut, many analysts believe they have to wait until March for reliable data. Weighed down by a cooling property market, industrial overcapacity and slowing investment, China's economy grew 7.4 percent in 2014, its slowest expansion in 24 years. Economists expect growth to cool further to 7 percent in 2015, even with additional stimulus measures. To lift flagging growth, the central bank reduced the amount of cash that banks have to hold as reserves earlier in February for the first time in over two years. In November, it cut interest rates, also for the first time in over two years. Most analysts believe policy will be loosened further in coming months in the form of more rate cuts and reserve ratio reductions. This is especially after data earlier this month showed growth in China's broad M2 money supply slumped to its lowest on record in January. Some economists said the plunge in M2 growth was a sign that more capital was leaving the world's second-largest economy as it cools, a trend that would tighten liquidity conditions and spur the central bank to ease policy. Lu Lei, the head of the research bureau at the central bank, said this month that the country's monetary policy will be adjusted to keep liquidity at a reasonable level.