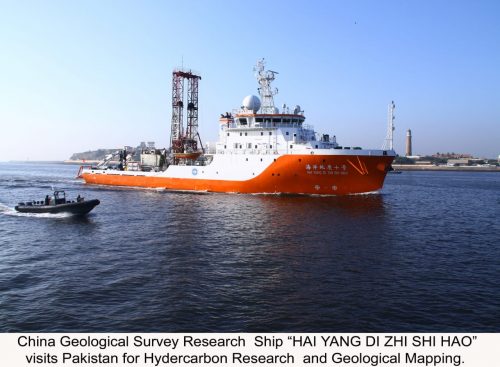 The visit of research ship was materialized after the meeting of Chief of the Naval Staff Admiral Zafar Mahmood Abbasi with Vice Minister China Geological Survey (CGS) Dr. Zhong Ziran, in Beijing last year. During the expedition, CGS ship conducted various Seismic and Oceanographic observations in the offshore area of Pakistan. Along with Chinese scientists, scientists from National Institute of Oceanography and Pakistan Navy also participated in the expedition. The acquired data will be jointly processed by Pakistani and Chinese scientists. This expedition is in line with growing cooperation between China and Pakistan in the field of geological survey and oceanography. This cooperation in the field of offshore research will continue in future and another expedition from CGS has also been planned in near future. It is expected that these expeditions will assist in resource mapping of our offshore areas.