BEIJING (92 News) – China Gezhouba Group Chairman Lyu Zexiang showed keen interest to invest in Pakistan. According to the details, Prime Minister Imran Khan is currently on official visit to China where he has started the meetings series with Chinese companies and officials. Lyu Zexiang called on Prime Minister in Beijing and discussed cooperation in the energy sector. He showed keen interest in exploring new business avenues in Pakistan especially in the energy sector. Foreign Minister Shah Mahmood Qureshi, Minister for Planning Makhdoom Khusro Bakhtiar, Minister for Railways Sheikh Rashid, Adviser on Commerce Razaq Dawood, Special Assistant on Petroleum Nadeem Babar and Chairman Board of Investment (BOI) Zubair Gilani were also present in the meeting. It may noteworthy that China Gezhouba Group Corporation is one of the most competitive listed companies with very strong financing capabilities. The Chinese group has expanded its business in more than one hundred countries and regions. 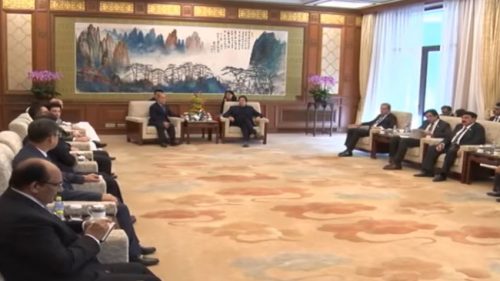 CEO of Long March Tyre Company, Li Qingwen also called on PM Imran Khan in Beijing. Minister for Foreign Affairs Makhdoom Shah Mahmood Qureshi, Minister for Planning Makhdoom Khusro Bakhtiar, Minister for Railways Sheikh Rasheed Ahmad, Adviser on Commerce Abdul Razzak Dawood, SAPM Nadeem Babar and Chairman Board of Investment (BOI) Zubair Gillani were present during the meeting. Chaoyang Long March Tyre Co Ltd is a member of the Lianoning Tyre Group and is one of the best tyre manufacturers. Earlier, PM Khan arrived in Beijing on a three day official visit to China. Chinese Cultural Minister Luo Shugang received him at the Airport. Chinese Ambassador to Pakistan Yao Jing and Pakistan envoy’s to China Naghmana Hashmi were also present. During his three-day visit, the prime minister will meet with President Xi Jinping and Premier Li Keqiang. Both Chinese leaders will separately host banquets in honour of the Prime Minister. A number of agreements and MoUs are expected to be signed at a ceremony to be witnessed by the two Prime Ministers.

DUSHANBE, Tajikistan (92 News) – Pakistan, China, Russia and Iran have stressed the need for formation of a national government in Afghanistan.

LAHORE (92 News) – During his visit to Sambrial and Sialkot, Chief Minister Punjab Sardar Usman Buzdar directed to remove 15 officers from their posts over negligence of duties, public complaints and poor performance.

ISLAMABAD (92 News) – The Election Commission of Pakistan (ECP) has issued notices to Information Minister Fawad Chaudhry and Senator Azam Swati over the allegations.

ISLAMABAD (92 News) – Foreign Office Spokesperson Asim Iftikhar has said that Pakistan does not believe in the politics of blocs.

DUSHANBE, Tajkistan (92 News) – Prime Minister Imran Khan had a bilateral meeting with President Kassym-Jomart Tokayev of Kazakhstan on the sidelines of the SCO Council of Heads of State meeting in Dushanbe on Thursday.

Pakistan to take on New Zealand in first ODI tomorrow

RAWALPINDI (92 News) – History will be made on Friday when national team led by Babar Azam will take on Tom Latham’s New Zealand in the first of the three One-Day Internationals at the Pindi Cricket Stadium.