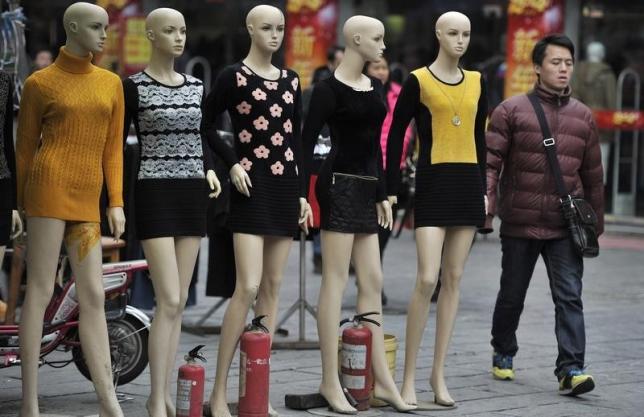 BEIJING - China grew at its slowest pace in six years at the start of 2015 and weakness in key sectors suggested the world's second-largest economy was still losing momentum, intensifying Beijing's struggle to find the right policy mix to shore up activity. A series of cuts in interest rates, lower reserve ratios at banks and easing measures in the property sector look to have mostly flowed into stock market speculation without delivering much support to fundamentals. Still, the economy's persisting slowdown means more stimulus measures are expected soon. Gross domestic product grew an annual 7.0 percent in the first quarter, slowing from 7.3 percent in the fourth quarter of 2014, China's statistics bureau said. While that matched the median forecast in a Reuters poll, analysts said it seemed at odds with data on the components of growth. Monthly retail sales, industrial output and fixed asset investment data released with the GDP figures all missed analyst expectations. Growth in fixed-asset investment (FAI), a key economic driver in China, was the slowest since 2000, while industrial output grew at its weakest since the global financial crisis in 2008. More bad news came from another major economic pillar, the real estate sector, with property investment rising an annual 8.5 percent in the first quarter, the weakest rate since 2009. "If you look at Q1, exports were poor, industrial production was poor, FAI was much slower, retail sales soft, so how can GDP in real terms still be 7 percent?" said Kevin Lai, senior economist at Daiwa in Hong Kong. The National Bureau of Statistics did not release a breakdown of the GDP figures, saying the final figures were not yet available. It was the weakest expansion since the first quarter of 2009, when the global financial crisis saw China's growth tumble to 6.6 percent. A massive stimulus package pulled theeconomy out of the slump but at the cost of saddling local governments with a mountain of debt. On a quarterly basis, growth slowed to 1.3 percent between January and March after seasonal adjustments, the statistics bureau said, from 1.5 percent in the previous three months. "Both a policy rate cut and bank reserve ratio cut are likely," said Louis Kuijs, chief Chinaeconomist at RBS in Hong Kong, saying the fact the monthly data didn't show an improvement in March increased the pressure for a rate cut. STOCK INDEXES UP China's stock indexes, which have been on a sharp rally since Beijing began easing monetary policy in November, initially rose but then weakened after the data, with the Shanghai Composite Index .SSEC down by more than 1 percent. Mainland investors have tended to celebrate weak data as they strengthen the case for more liquidity injections, some of which find their way into the stock market. China's leadership, while emphasizing the need to adapt to "a new normal" of slower but better-quality growth, have signalled growing concern about a deeper downturn that could fuel job losses and debt defaults. Premier Li Keqiang said last week that China faced increased downward pressures, and the government must "stand up to" such pressure to protect employment and incomes. Employment was being supported by the services sector, with the survey-based unemployment rate standing at 5.1 percent, according to Sheng Laiyun, the statistics bureau spokesperson. However, weaker growth and nagging factory deflation could force more manufacturers to cut jobs, analysts say, especially if Beijing follows through on threats to allow more defaults and bankruptcies in industries suffering from overcapacity. "The problem of unemployment may show up if GDP growth continuously stays below 7 percent." said Nie Wen, an economist at Hwabao Trust in Shanghai. - Reuters