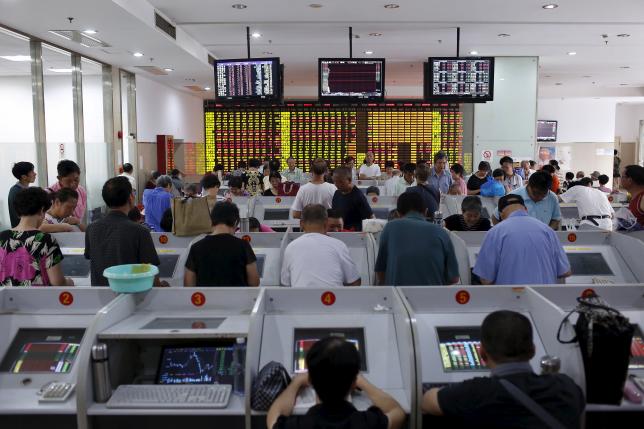 HONG KONG - China stocks slid on Monday as investors feared Beijing would let the yuan depreciate further, despite statements from the central bank last week that it sees no reason for further declines. The CSI300 index .CSI300 fell 0.5 percent to 4,054.80 points by the end of the morning session, while the Shanghai Composite Index .SSEC lost 0.1 percent to 3,960.61 points. The central bank has been trying to steady the yuan in recent sessions and soothe global investors' jangled nerves after it unexpectedly devalued the currency by nearly 2 percent last Tuesday. The yuan was little changed on Friday and Monday, but market watchers believe the currency is likely to remain under downward pressure as the economy struggles, keeping pressure on shares of importers and firms with high U.S. dollar debt. "Investors were not keen to go into market on anticipation the yuan can depreciate further in the long run," Steven Leung, director at UOB Kay Hian in Hong Kong said. Insurers also fell on concerns about potential claims after massive explosions in the port of Tianjin, Leung added. Ping An Insurance Group (601318.SS) fell 2.9 percent and China (601628.SS) lost more than 3 percent in Shanghai. PICC Property and Casualty (2328.HK) slid 1.7 percent in Hong Kong. Futures markets pointed to expectations of further losses for the benchmark indexes, with China CSI300 stock index futures for August CIFc1 falling 1.0 percent to 3,970.6, 84.20 points below the current value of the underlying index. But Leung said downside risks were believed to be limited, with investors expecting the government and its agents will step in again to support the market if it threatens to tumble again as it did in early summer. In Hong Kong, concerns over China's cooling economy pushed the Hang Seng index .HSI down 1.0 percent to 23,754.21 points, while the Hong Kong China Enterprises Index .HSCE lost 1.7 percent to 10,868.29. The index measuring price differences between dual-listed companies in Shanghai and Hong Kong .HSCAHPI stood at 138.01. A value above 100 indicates Shanghai shares are pricing at a premium to shares in the same company trading in Hong Kong, and vice versa. Under the Hong Kong-Shanghai Stock Connect scheme .NQUOTA.SH, a net 0.59 billion yuan went northbound to Shanghai, a tiny fraction of the 13 billion yuan daily quota. The total volume of A shares traded in Shanghai was 25.18 billion shares, while Shenzhen volume was 18.13 billion shares. Total trading volume of companies included in the HSI index was 0.5 billion shares. Huatai Securities (6886.HK) rose 1.4 percent after it was being included in the Chinese enterprises index .HSCE effective mid-September, while China Coal Energy (1898.HK) fell 1.8 percent after being taken out of the index. -Reuters