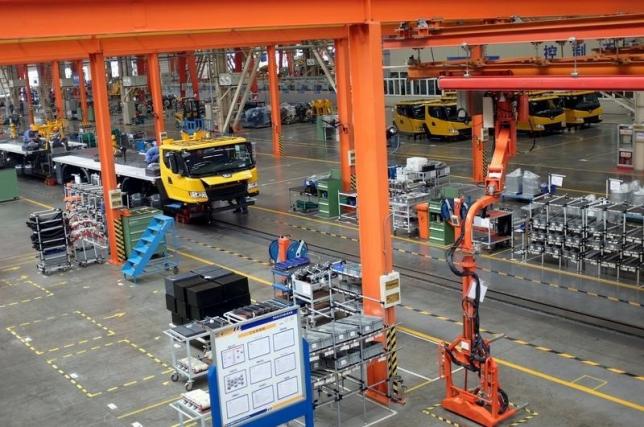 BEIJING - China's industrial profits returned to growth in the first two months of 2016, despite weakening business conditions and slowing economic growth in the world's second-largest economy. Profits earned by Chinese industrial firms in January and February combined rose 4.8 percent from a year earlier, totaling 780.7 billion yuan ($119.8 billion) in the two-month period, the National Bureau of Statistics (NBS) said on Sunday. That compared with an annual fall of 4.7 percent in December 2015, which was the seventh straight month of decline. The positive trend was driven in part by quicker product sales of industrial firms and a narrowing in the decline of industrial producer prices, said He Ping, an NBS official, in a statement accompanying the data. The oil processing, electrical machinery and food sectors contributed significantly to growth in profits, He added, saying the sectors benefitted from lower oil prices. Growth in the food industry was driven by strong demand as well as a decline in prices for some raw materials, the statement added. The bureau always gives a combined profit figure for the first two months of each year to smooth out seasonal distortions caused by the Lunar New Year holiday, when most companies are closed for the long celebrations. China's producer prices fell for the 48th month in a row in February though their pace of decline eased, highlighting the deeply entrenched pressures facing its manufacturers. China's Premier Li Keqiang said on Thursday that the country has enough policy tools to keep the economy stable despite "deep rooted" structural problems and downward pressure. Chinese leaders have set a growth target of 6.5 percent to 7 percent for this year, introducing a band rather than a hard target as it seeks greater flexibility in juggling growth, job creation and restructuring of a host of "zombie companies" in bloated industries. -Reuters