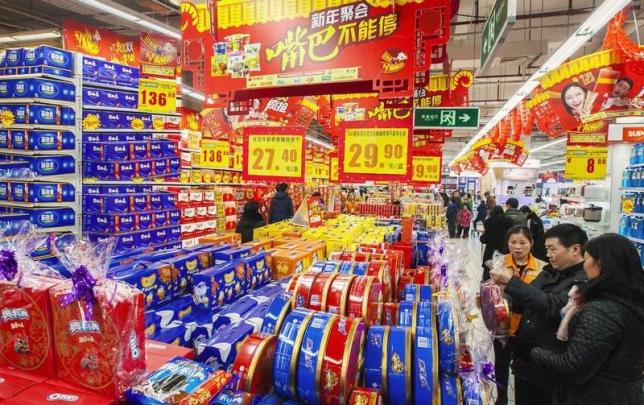 SHANGHAI - China's inflation data for March produced small positive surprises, but remained tepid, with little sign that Beijing's easing measures to date have significantly cut worrisome deflationary pressure. That has led many to predict more easing measures in the pipeline, including more cuts to reserve requirement ratios for banks, although there is debate over how effective those might be at juicing inflation. In March, China's annual consumer inflation rate (CPI) stayed flat at 1.4 percent, above a poll's projected 1.3 percent. Producer prices (PPI) fell slightly less than projected, contracting 4.6 percent rather than the forecasted repeat of February's 4.8 percent pace. The March inflation data is the first in a batch of key economic data that will climax with release of first-quarter growth numbers on April 15. A Reuters poll expects growth to be a six-year low of 7 percent. PRESSURE ON MARGINS PPI has now been in negative territory for three years, highlighting sustained pressure on profit margins at Chinese companies - in particular heavy industry - as Beijing struggles to restimulate headline growth. The higher-than-expected CPI was driven by a sudden rise in pork prices, which been a drag on CPI every month since December 2013. But consumer inflation is still far short of Beijing's official 3 percent target for 2015, and some economists see that goal at risk. "Consumer price inflation held steady in March but we expect a drop in food price inflation to pull it lower over the coming months," wrote Julian Evans-Pritchard of Capital Economics in a research note. Producer prices were dragged down again by mining and raw materials components. Friday's data follows a surprise recovery in manufacturing activity for March, with the official Purchasing Managers' Index (PMI) edging up to 50.1, in expansionary territory, from February's 49.9. WORRIED POLICYMAKERS Policymakers have publicly expressed worry that the risk of deflation is rising for the world's second-largest economy, as the drag from a property market downturn and widespread factory overcapacity is compounded by an uncertain global outlook and soft commodity prices. But while lower commodity prices have punished the extraction and power production sectors, the pain is not felt across the board, as some companies have taken advantage of lower input costs to maintain profit margins. The People's Bank of China (PBOC) has made multiple cuts to guidance lending rates, and one cut to reserve requirement ratios at banks. It also launched a long-awaited deposit insurance program in April, but economists said those moves have had little impact on real borrowing costs. "The weak inflation profile suggests that further monetary policy easing is still needed in spite of recent retreats of onshore money market rates," ANZ economists Zhou Hao and Liu Ligang wrote after Friday's data release. "We believe that only permanent liquidity injection will be able to sustain the current favorable monetary conditions to head off the risk of deflation," they said. The central bank has guided benchmark short-term money rates down sharply in recent weeks, and the interest rate yield curve has risen and steepened slightly as short term rates have fallen while longer term expectations have risen. - Reuters