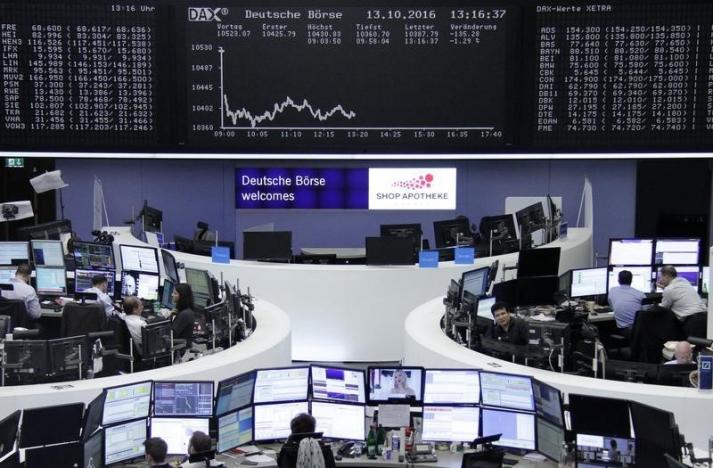 LONDON – Global stocks and the dollar rose on Friday, bouncing back from losses on the previous day, buoyed by stronger-than-expected Chinese inflation data and encouraging earnings from banks like JP Morgan.
The pound also found traction following recent weakness after the governor of the Bank of England said he was "not indifferent" to the foreign exchange rate. September producer prices in China unexpectedly rose for the first time in nearly five years, while consumer inflation also beat expectations, easing some concerns about the health of the world's second-biggest economy. European shares tracked Asian markets higher. The pan-European STOXX 600 was up 1.5 percent, helped by rallies in mining and banking stocks, while MSCI's broadest index of Asia-Pacific shares outside Japan .MIAPJ0000PUS ended up 0.6 percent. E-mini S&P futures ESc1 were up 0.4 percent, pointing to a higher open on Wall Street. Banks were boosted by strong results from JP Morgan (JPM.N), which left it set to open at a 2 month high. Citigroup (C.N) and Wells Fargo (WFC.N) were also poised to open higher after results. However, equities were still set for their largest weekly drop in over a month after a week which has seen expectations of a Federal Reserve rate hike build and substantial volatility in commodity prices. While the MSCI World .WORLD index was up 0.3 percent on Friday, it was down 1 percent for the week - its biggest weekly drop since early September. "Inflation has been quite a worry for some time, but the PPI number today is a very nice change, and a much better number than the negative numbers we had prior. So that gives us a bit of confidence," said Veronika Pechlaner, European equity fund manager at Ashburton, who said that the falls this week were not a major cause for concern. "The market felt exuberant heading into this week... We've had a strong couple of months, so now a bit of normalization is coming through." The dollar index rose 0.3 percent to 97.834 .DXY, and was set for a weekly gain of 1.3 percent - its second straight week of gains. It was down slightly from a seven month high touched on Thursday. U.S. retail sales rebounded in September amid a surge in motor vehicle purchases and a rise in discretionary spending, pointing to sustained domestic demand that reinforces expectations of an interest rate increase from the Federal Reserve in December. Boston Fed President Eric Rosengren endorsed the "very high" odds that financial markets have priced in for a U.S. interest rate hike at the end of the year. Federal Reserve Chair Janet Yellen is also due to speak later on Friday. The Fed's minutes from its September meeting prompted investors to raise their bets on a December rate rise, and fueled the rally in the greenback this week. The strength of both domestic and global growth will be a key consideration for the Fed, demonstrated when weak Chinese export numbers on Thursday not only hit global equities but also stopped a rise in U.S. yields and halted the dollar's advance. Even despite Friday's inflation data, Chinese stock ended little changed on Friday as investors wrestled with the mixed economic picture. The producer price increase will be good news for profits and for Beijing as the government struggles to reduce a mountain of corporate debt. ECONCN The greenback, which slid Thursday to 103.340 yen on the Chinese trade data, gained 0.5 percent to 104.20 yen JPY=, edging back towards a 2-1/2-month peak of 104.635. It was on track to gain 1.2 percent on the week. Having started the day with further falls, sterling recovered all of the day's losses against the dollar on Friday after Bank of England Governor Mark Carney said the bank was not indifferent to the level of the pound, now down almost 20 percent since Britain voted to leave the European Union in June. The pound had been pressurized by comments by European Council President Donald Tusk, who will run the Brussels side of Britain's negotiations on leaving the EU, that the bloc will not offer London any softer terms than a "hard Brexit". Such a deal would end Britain's membership of the single market and disrupt access to the country's main trading partner. The euro slipped 0.4 percent to $1.1013 EUR= after seeing a 2-1/2-month low of $1.0985 on Thursday. The common currency was en route for a 1.7 percent weekly loss. European bond yields edged higher ahead of Yellen's speech. Elsewhere in currencies, the Singapore dollar SGD=D4 hit a seven-month low after the economy unexpectedly contracted in the third quarter, keeping alive easing prospects even though the central bank stood pat on policy earlier in the day. Thailand's stocks .SETI rose 4.6 percent and the baht THB=TH gained about 1 percent versus the dollar after the government urged the country to remain calm after the death of King Bhumibol Adulyadej. "On the assumption that the succession goes smoothly, I would assume that foreign investor inflows will continue," said Andrew Bresler, director at Saxo Capital Markets based in Singapore. The Turkish lira edged down 0.1 percent, but was up from Thursday's record low. The market is anxious over government plans to push through an executive presidential system. Crude oil extended gains after bouncing overnight on a U.S. government report showing hefty draws in diesel and gasoline. [O/R] Brent crude was up 0.3 percent at $52.16 a barrel LCOc1, having risen to a one-year peak of $53.73 on Monday on expectations for an OPEC output cut. –Reuters