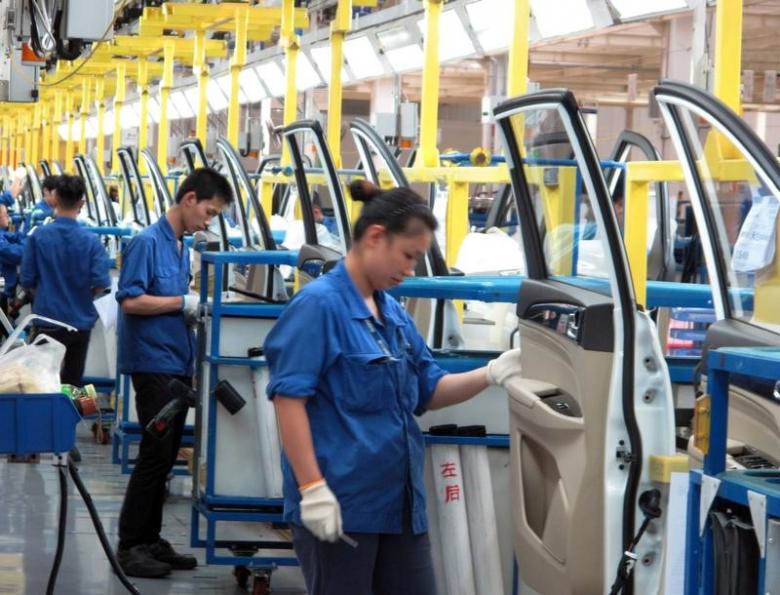 BEIJING - Activity in China's manufacturing sector grew more than expected in November, expanding at its strongest pace in more than two years, as the world's second-largest economy picks up momentum heading into what promises to be a tumultuous 2017. After a rocky start to the year, China's factories have perked up in recent months, buoyed by a government infrastructure building spree and a housing boom that is starting to show signs of fatigue. Growth has also accelerated in the services sector to levels not seen since 2014, pointing to improvement not only in heavy industries like steel but also in the broader economy. "The next move by the central bank will be an (interest rate) hike instead of a cut," said Raymond Yeung, chief economist of Greater China for ANZ in Hong Kong. "But we believe that won't happen over the next 12 months because the current environment is still very vulnerable." The official Purchasing Managers' Index (PMI) rose to 51.7 in November from previous month's 51.2 and above the 50-point mark that separates growth from contraction on a monthly basis. November's reading was above the prediction of a Reuters poll for 51.0 and matched a previous high in July 2014. The last time China's PMI was higher was in April 2012, when it was 53.3. The official survey also pointed to building inflationary pressures, as the construction frenzy and reductions in excess industrial capacity have spurred a spectacular months-long rally in Chinese commodity prices. A sub-index for raw materials prices jumped to 68.3 in November from 62.6 in October, and a drop in inventories suggested a fresh round of factory restocking ahead. But AZ's Yeung doesn't think the higher producer prices will present immediate challenges for the central bank as they won't filter through to consumers until the end of next year. Moreover, commodities' futures prices have plunged this week, with steel seeing its worst one-day plunge on record, as major trading exchanges took further steps to tame the rally and curb speculation. ECONOMY STABILISING, BRACING FOR A BUMPY RIDE China's economy expanded at a steady 6.7 percent clip in the third quarter and looks set to hit Beijing's full-year target of 6.5 to 7 percent, fuelled by stronger government spending, record bank lending and the red-hot property market that are adding to its growing pile of debt. Factory output quickened in November, with the sub-index rising to 53.9 from 53.3, the official survey showed. Total new orders saw another month of solid improvement, rising to 53.2 from October's 52.8. But large firms continued to outperform smaller ones, with the gap widening in November, highlighting that the government's dependence on big state firms for growth this year has not changed. Indeed, an independent factory survey published by Caixin/Markit on Thursday focusing on smaller companies showed more modest growth that slowed from October. "Overall, we judge that the economy has gained momentum in the short term but the quality of growth may have deteriorated, as evidenced by a further drop in the official PMI for small enterprises and a drop in the Caixin PMI," economists at Nomura said in a note. A measure of construction industry activity in a separate non-manufacturing survey published Thursday stood at 60.4, softening from 61.8 in October but still high as the government races to build new roads, rail lines and ports to buoy growth. But the property sector saw a not-too-surprising fall as the sizzling housing market cools down following a slew of tightening measures imposed by policymakers who are fearful of a property bubble. New export orders also increased, though they were barely in expansionary territory. Any pickup in external demand will be welcome for China's massive factory sector as the housing boom looks set to fade and worries grow about a potential trade war with the United States as President-elect Donald Trump prepares to take charge. During the election campaign, Trump had threatened to slap high tariffs on Chinese goods and said he would brand China a currency manipulator on Jan. 20, his first day in office. Trump's upset win has already fuelled a surge in the U.S. dollar, helping to push the yuan currency to 8-1/2-year lows and threatening China's policymakers with a surge in capital outflows. A separate reading on the services sector also showed the pace of growth quickened in November from the previous month. The official non-manufacturing Purchasing Managers' Index (PMI) stood at 54.7 in November, the strongest since June 2014. That compared with the previous month's reading of 54.0 and remained well above the mark that separates growth from contraction on a monthly basis. -Reuters