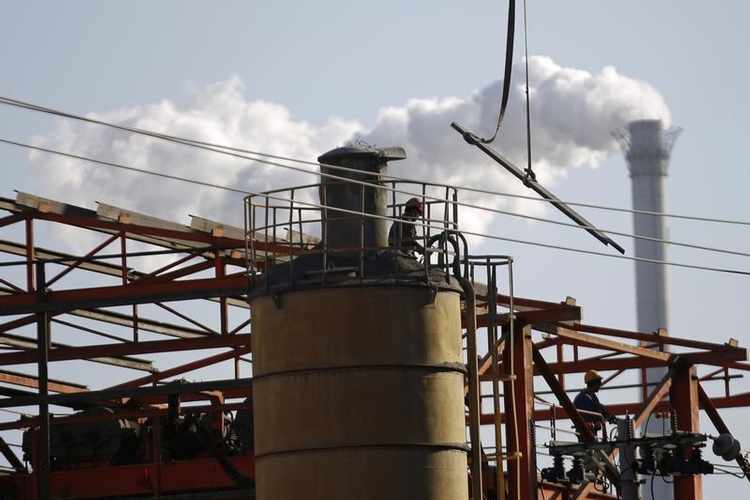 The official Purchasing Managers' Index (PMI) released on Saturday rose to 51.5 in March, from 50.3 in February, and was well above the 50-point mark that separates growth from contraction on a monthly basis.

Analysts surveyed by Reuters had forecast the reading would pick up only slightly to 50.5.

The findings add to a growing amount of data which suggest that China's economy has carried more momentum into the first quarter from last year than analysts had expected, which should keep synchronised global growth on track for a while longer even as trade tensions build.

February's print had been the lowest in 1-1/2 years, but many analysts suspected it was due to disruptions related to the long Lunar New Year holidays, not a sharp drop in consumption.

Indeed, the March survey showed manufacturers shifted into higher gear as usual as seasonal demand picked up at home and abroad. The sub-index for output jumped to 53.1 from 50.3 in February, while total new orders rose to 53.3 from 51.0 and export orders climbed to 51.3 from 49.0.

The China Logistics Information Centre, in a commentary on the PMI figures, said it expected first-quarter economic growth to be about 6.8 percent. Early this year, economists polled by Reuters were pencilling in a fade to around 6.6 percent.

Helping drive positive sentiment, exports have been better than expected in the first two months of the year, particularly for tech products, the fastest-growing segment of China's industrial sector. Though a sub PMI for hi-tech manufacturing eased in March, growth remained solid.

However, a sharp escalation in trade tensions with the United States is clouding the outlook for both China's "old economy" heavy industries and "new economy" tech firms.

The Trump administration slapped hefty tariffs on steel and aluminium imports last week and then targeted China specifically with plans for additional tariffs of up to $60 billion of itsgoods, likely focusing on tech and telecommunications products.

"Stress tests have shown the new US tariffs will have a relatively small impact on Chinese steel. Chinese steel firms should not be overly worried and should focus on guaranteeing demand from the domestic market and our major exporters," the China Steel Logistics Professional Committee said.

SPRING FORWARD OR FALL BACK?

This spring could see a major test of Chinese manufacturers' surprising 1-1/2-year run.

In the first quarter, China's steel companies defied expectations for a winter lull and continued to ramp up output in response to strong sales, while boosting borrowing, capital expenditure and hiring, a survey from the China Beige Book showed on Wednesday.

Production increased further after winter smog controls expired on March 15 in many areas. A separate PMI on the steel sector rose to 50.6 in March from 49.5 in February, the China Logistics Information Centre (CLIC) said.

At the same time, growth in property sales and new construction starts appears to be slowing, and Beijing has hit the brakes on some local governments' infrastructure spending due to concerns over high debt levels.

Those factors, along with rising borrowing costs, should weigh on activity eventually, with economists sticking to forecasts that China's growth will cool to around 6.5 percent by the end of the year.

A sister survey showed growth in China's service sector also kicked up a notch in March, with the official non-manufacturing Purchasing Managers' Index (PMI) rising to 54.6 from 54.4.

A sub-reading for construction activity stood at 60.7 in March, up from 57.5 in February.

Chinese policymakers are counting on growth in services and consumption to rebalance their economic growth model from its heavy reliance on investment and exports. The services sector now accounts for over half of the economy, with rising wages giving Chinese consumers more spending clout.

China is aiming for economic growth of around 6.5 percent this year, the same target as in 2017, while pressing ahead with its campaign to reduce risks in the financial system, Premier Li Keqiang said earlier this month.

A composite PMI covering both the manufacturing and services activity rose to 54.0 in March, from February's 52.9.