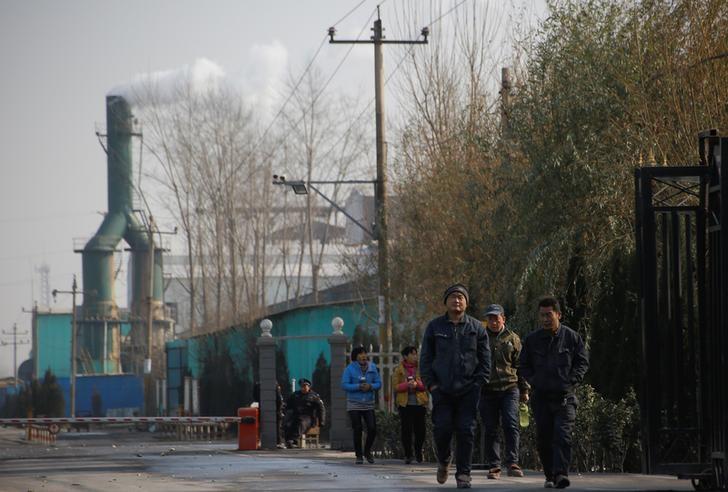 BEIJING (Reuters) - China reported weaker-than-expected activity data for May, adding to views the economy is finally starting to slow under the weight of a prolonged crackdown on riskier lending that is pushing up borrowing costs for companies and consumers. Industrial output, investment and retail sales all grew less than expected, data showed on Thursday, offsetting upbeat trade data and suggesting further weakness ahead if Beijing perseveres with its crackdown on factory pollution and questionable local government spending. Adding to the uncertainty over economic conditions, China’s central bank left its short-term money market rates unchanged earlier in the day, surprising financial markets and analysts who had expected it to follow a policy rate rise by the US Federal Reserve overnight. China’s fixed-asset investment growth cooled to 6.1 percent in the January-May period from a year earlier, the slowest pace since February 1996. Retail sales in May expanded at the slowest pace since June 2003, according to Reuters calculations. May industrial output rose 6.8 percent from a year earlier, the National Bureau of Statistics said, missing analysts’ estimates for a rise of 6.9 percent and compared with a rise of 7 percent in April. April data had also been mixed, suggesting a softening in demand. Analysts polled by Reuters had expected investment growth to remain steady at 7.0 percent in the first five months of the year, the same pace seen in January-April. Private sector fixed-asset investment rose 8.1 percent in January-May, compared with an increase of 8.4 percent in the first four months, according to official data. Private investment accounts for about 60 percent of overall investment in China. Growth in infrastructure spending, a powerful economic driver last year, slowed to 9.4 percent in the first five months, compared with a rise of 12.4 percent in January-April. Analysts forecasting an economic cooldown are largely basing their assumptions on slowing local government spending and real estate investment in response to regulators’ campaign to reduce financial risks and curb a rapid build-up in debt. But a construction boom which began in 2016 may still be going strong. Data from the China Construction Machinery Association showed the sales of excavators doubled in May from a year earlier. Retail sales rose 8.5 percent in May from a year earlier, missing with expectations of an increase of 9.6 percent, compared with a rise of 9.4 percent in April. The growth was the slowest since June 2003. China’s economy will likely expand by around 6.7 percent in the second quarter from a year earlier, the State Information Centre (SIC), an official think tank, said recently. That would mark only a fractional easing from 6.8 percent growth reported by Beijing in each of the three preceding quarters. In the same article, the think tank said it expects China’s industrial output to grow about 6.6 percent in April-June from a year earlier, with fixed-asset investment growth of around 7.2 percent and retail sales seen rising about 10 percent. While first-quarter growth was better than expected, economists polled by Reuters still expect China’s economy to gradually slow to around 6.5 percent this year, from 6.9 percent in 2017, even if there are no trade shocks. A third round of talks between China and the United States early this month ended with few signs of progress, as Beijing issued a counter-warning that any trade and business deals reached with Washington would be void if the United States implemented tariffs. On Friday, Washington is expected to release a list of some $50 billion worth of Chinese goods that will be subject to a 25 percent tariff.