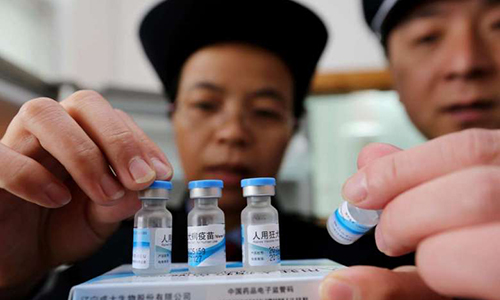 SHANGHAI – China must strengthen regulation of its market for vaccines, the World Health Organization (WHO) said on Monday, after a bust of an illegal black market drugs ring this month underscored the country's regulatory weaknesses. Police have arrested more than 130 suspects over a scandal in which 310 million yuan ($48 million) of illegal vaccines was sold onto the market. The value of the illegal trades could be as much as $90 million. "This incident has highlighted the need for much stricter enforcement of vaccine management regulations across the board," WHO China representative Bernhard Schwartländer said in an emailed statement. The vaccines, some targeting meningitis and rabies, are suspected of having been sold in dozens of places around China since 2011. Chinese vaccine production itself was safe, as was distribution of vaccines through the government's Expanded Program on Immunization, the WHO said, but regulatory loopholes remained to be tackled in the private sector. "The problem that last week's events has brought to light, is that distribution of vaccines for the private market does not follow the same high standards," the WHO said. Some crucial vaccines for children are only available on the private market, such as those aimed at pneumonia and meningitis, pneumococcal and rotavirus. The scandal has stirred angry debate, casting a shadow over government ambitions to bolster the domestic drug industry and underlining the challenge it faces to regulate a widespread and fragmented medicine supply chain. It has also drawn the ire of senior leaders, prompting regulators to point to a lack of resources. The head of the food and drug watchdog's drug supervision department admitted last week there were "certain loopholes in our regulatory work". –Reuters