BEIJING (92 News) – A meeting was held between Foreign Minister Khawaja Muhammad Asif and State Councilor and Foreign Minister Wang Yi of the People’s Republic of China on April 23 at Beijing. According to a press release received from Beijing on Monday, Kh Asif congratulated Wang Yi on his re-election as foreign minister and elevation as state councilor. He also congratulated him on re-election of President Xi Jinping as President of People’s Republic of China and as the “Core” leader of CPC. In the meeting, the two sides exchanged in-depth views on all matters of mutual concern. The minister appreciated the vibrant role of Shanghai Cooperation Organization in the region as a significantly vital forum for regional cooperation. He underlined Pakistan’s support to China’s active chairmanship of Shanghai Cooperation Organization in 2017-18. Pakistan looks forward to a productive and fruitful meeting of heads of state of SCO to be held in Qingdao in June 2018. Kh Asif also appreciated the Chinese initiative for Pakistan-China-Afghanistan Foreign Ministers’ Trilateral Mechanism for enhancing cooperation with Afghanistan. He also apprised him of the grave situation prevailing in Indian Occupied Kashmir (IOK). State Councilor Wang Yi stated that Pakistan and China are close friends and all-weather strategic cooperative partners. He appreciated Pakistan’s active participation in Shanghai Cooperation Organization and all its mechanisms. He expressed China’s strong support for Pakistan’s contribution to enhancing regional peace and cooperation and its relentless and tireless efforts in countering terrorism. Both sides agreed to enhance and further deepen their bilateral cooperation and pledged to play a key role in regional stability through Shanghai Cooperation Organization and its forums. 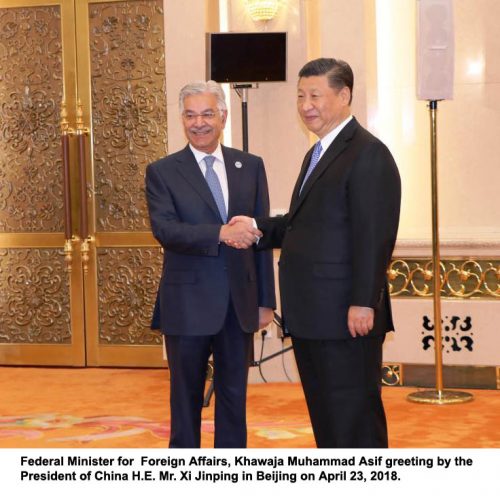 Meanwhile, Foreign Minister of Pakistan Khawaja Muhammad Asif met with President of China Xi Jinping. The meeting was also attended by Foreign Ministers of other member states of Shanghai Cooperation Organization. The minister conveyed the warm sentiments of friendship and brotherhood from the people of Pakistan to the people of China. He highlighted that Pakistan and China were all weather strategic cooperative partners whose bonds of mutual trust and respect were eternal. Appreciating the common vision of a peaceful and prosperous neighbourhood, the foreign minister underscored the importance of President Xi Jinping’s vision of the Belt and Road Initiative which have received wide international support. He highlighted that together, Pakistan and China have proven the viability of the Belt and Road Initiative through its flagship project, the China-Pakistan Economic Corridor. President Xi Jinping underlined the close friendship between China and Pakistan and appreciated Pakistan’s role as a new member of the Shanghai Cooperation Organization.