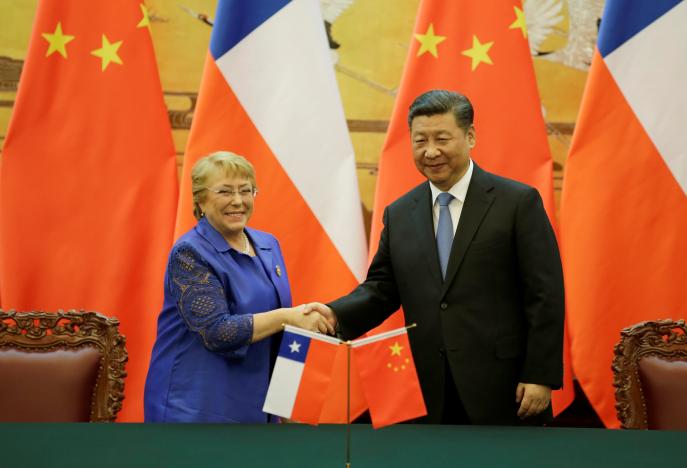 BEIJING - Chinese President Xi Jinping pledged $124 billion on Sunday for his ambitious new Silk Road plan to forge a path of peace, inclusiveness and free trade, and called for the abandonment of old models based on rivalry and diplomatic power games.

China has touted what it formally calls the Belt and Road initiative as a new way to boost global development since Xi unveiled the plan in 2013, aiming to expand links between Asia, Africa, Europe and beyond underpinned by billions of dollars in infrastructure investment.

China's most important diplomatic event of the year, the two-day summit offers Xi another chance to bolster China's global leadership ambitions as U.S. President Donald Trump promotes "America First" and questions existing global free trade initiatives like NAFTA."We should build an open platform of cooperation and uphold and grow an open world economy," Xi told the opening of the summit.

Xi said the world must create conditions that promote open development and encourage the building of systems of "fair, reasonable and transparent global trade and investment rules".

"Trade is the important engine of economic development," Xi said.

He said the world must promote the multilateral trade system, the establishment of free trade regions, and the facilitation of free trade.

Xi pledged a massive funding boost to the new Silk Road, including an extra 100 billion yuan ($14.50 billion) into the existing Silk Road Fund, 380 billion in loans from two policy banks and 60 billion yuan in aid to developing countries and international institutions in new Silk Road countries.

In addition, Xi said China would encourage financial institutions to expand their overseas yuan fund businesses to the tune of 300 billion yuan.

Xi did not give a timeframe for the new loans, aid and funding pledged on Sunday.

Leaders from 29 countries are attending the forum, which ends on Monday.

China has rejected criticism of the plan and the summit, saying the scheme is open to all, is a win-win, and aimed only at promoting prosperity.

"What we hope to create is a big family of harmonious co-existence," Xi said, adding pursuit of the initiative will not resort to outdated geopolitical manoeuvring.

"In advancing the Belt and Road, we will not retread the old path of games between foes. Instead we will create a new model of cooperation and mutual benefit."

Xi said the new Silk Road would be open to all, including Africa and the Americas, which are not situated on the traditional Silk Road.

"No matter if they are from Asia and Europe, or Africa or the Americas, they are all cooperative partners in building the Belt and Road."

There are also several European leaders attending, including the prime ministers of Spain, Italy, Greece and Hungary. -Reuters