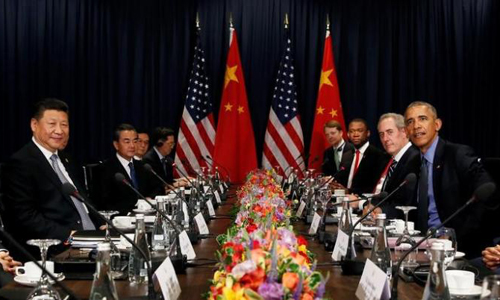 LIMA- Chinese President Xi Jinping pledged to open the economy further on Saturday as leaders of Asia-Pacific countries sought new free-trade options following Donald Trump's election to U.S. president on promises to scrap or renegotiate trade deals.
All eyes were on China at this year's APEC summit in Lima, Peru just over a week after Trump's surprise victory in the United States dashed hopes of the largest-ever U.S.-proposed trade deal, the Trans-Pacific Partnership (TPP), coming to fruition. U.S. President Barack Obama has championed the TPP as a way to counter China's rise, but he has now stopped trying to win congressional approval for the deal signed by 12 economies in the Americas and Asia-Pacific, excluding China. Without U.S. approval the current agreement cannot be implemented. Trump campaigned against the TPP and the North American Free Trade Agreement (NAFTA) as bad for U.S. jobs. He said he would scrap the TPP and threatened to impose tariffs on imports from China and Mexico. Following a meeting with Obama, Xi said Beijing's relationship with Washington was at a "hinge moment" and called for a smooth transition. Xi has been selling an alternate vision for regional trade by promoting the Beijing-backed Regional Comprehensive Economic Partnership (RCEP), which as it stands excludes the Americas. "China will not shut its door to the outside world but open more," Xi said in a keynote address at APEC. "We're going to...make sure the fruits of development are shared." Chinese attendance at the APEC meeting was its largest ever and regional delegates said China would take the lead on trade if the U.S. turned toward protectionism. The Obama administration has warned that the RCEP would not include strong protections for workers, the environment or intellectual property. In Lima on his last scheduled trip abroad as president, Obama said the United States worked to include labor provisions in a U.S.-Peru free trade agreement to lift wages and standards for Peruvian workers. "That's the kind of attitude that we want to try to promote in ... the years going forward, and my hope is that that policy will continue." TPP leaders held a meeting at APEC, where Obama urged them to work together to advance TPP, the White House said. The leaders had confirmed the economic and strategic importance of the agreement, Japanese Deputy Chief Cabinet Secretary Kotaro Nogami told reporters after the meeting. CHINA FILLS THE VOID? With the fate of the TPP uncertain, China's talks on RCEP, which include Australia, India and more than a dozen other countries, are seen as perhaps the only path to the broader Free Trade Area of the Asia-Pacific (FTAAP) that APEC aspires to. "It's a more traditional trade deal, reducing tariffs on goods and services. It's not as far reaching as the TPP," Australian Prime Minister Malcolm Turnbull told reporters of RCEP. But "the more access we can get to more markets for our exports, the better." New Zealand Prime Minister John Key said the United States was an important partner in the region, but China would fill the void if a Trump administration backs away from free trade. Key said TPP members might be able to incorporate "cosmetic changes" to make the deal more palatable to the real estate magnate and former reality TV star. "The Trump Pacific Partnership for instance, that'd be fine," Key said, laughing. Despite China's overtures, some APEC members were determined to press on with TPP and held out hopes the United States would still show leadership on trade. "Our geopolitical position is with the United States, obviously," Mexican President Enrique Pena Nieto said. "That's where our eyes are set and that's what we are working for." Pena Nieto said the NAFTA pact between the United States, Mexico and Canada should be "modernized," noting that issues relating to labor rules and the environment were among those that could be included in such talks - two areas Mexico had believed it could update with the United States via TPP. Trump has vowed to scrap NAFTA if he cannot renegotiate it. Mexico wants to harness Canadian support for NAFTA and TPP, and after a meeting between Pena Nieto and Canada's Prime Minister Justin Trudeau, Mexico's government said in a statement the pair stated their countries should keep working together "to promote North America as a competitive and prosperous region." The two also pledged their nations' commitment to the "free market", the statement added, without referring to NAFTA or TPP. Mexico, Japan, Australia, Malaysia, New Zealand and Singapore aim to continue with TPP with or without the United States, Mexico's economy minister, Ildefonso Guajardo, said on Friday. Several APEC members said it was too soon to write off support from Trump on TPP. "Barack Obama was not a supporter of the TPP when he became elected and he's leaving office as one of its greatest advocates," Australia's Turnbull said. -Reuters