Djokovic, Murray and Nishikori all advance 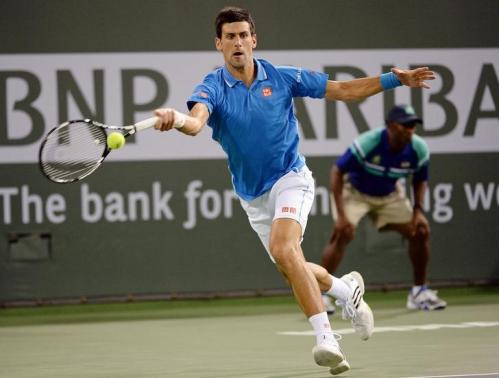 Djokovic, Murray and Nishikori all advance

INDIAN WELLS - Australian Open champion and top seed Novak Djokovic launched his BNP Paribas Open title defense in ruthless style on Saturday, crushing Cypriot Marcos Baghdatis 6-1 6-3 in the second round. Playing near-flawless tennis from the baseline, the Serb broke his opponent twice in each set to coast to victory in just under an hour on the showpiece stadium court at the Indian Wells Tennis Garden. Fourth seed Andy Murray erased memories of early losses at the venue with a 6-1 6-3 demolition of Canadian Vasek Pospisil and Japanese trailblazer Kei Nishikori recovered from an erratic start to beat American Ryan Harrison 6-4 6-4. Djokovic, seeking a fourth title at Indian Wells, breezed through the opening set in just 25 minutes before sealing the win when Baghdatis hit a backhand long on the second match point. "It went very well for me, a very solid performance from the beginning," the world number one said courtside after improving his record this season to 15-2. "I served well and from the baseline I didn't give Marcos many chances to come back in the match. Great performance against a quality opponent, against somebody that was a former top-10 player and that knows how to play on a big stage. "Of course, having won the title in Australia, it allows me to have and carry this confidence into every other event that is coming up in the season." Murray broke Pospisil's serve three times in the opening set and twice in the second to ease to victory in 79 minutes on a sweltering afternoon. Ousted in the opening round in 2011 and 2012, the 27-year-old Scot hit 14 winners and won five of his nine break point chances to dominate the match. SMART MATCH "I've struggled a bit in the last few years here so I decided to try and play a very solid match and adjust to the conditions," world number four Murray said. "It was very hot and that made the ball pretty lively. "Controlling the ball isn't that easy. I thought I played quite a smart match." Nishikori, who became the first Asian male to reach a grand slam singles final at the U.S. Open last year, broke Harrison five times while losing his own serve on three occasions before sealing his win in just under an hour and a half. "It was a bit up and down but I played well in the second set," said the 25-year-old Japanese. "I was playing almost a perfect game." The fifth seed, who lost to Marin Cilic in last year's U.S. Open final before ending a landmark season with four ATP World Tour titles, will next play Spaniard Fernando Verdasco, who beat Australia's James Duckworth 6-2 7-6. In other matches, 10th-seeded Croatian Cilic, back on the circuit after being troubled by a shoulder injury, was upset 6-4 6-4 by Argentine Juan Monaco while eighth-seeded Spaniard David Ferrer battled past Croatia's Ivan Dodig 4-6 6-1 7-6. - Reuters