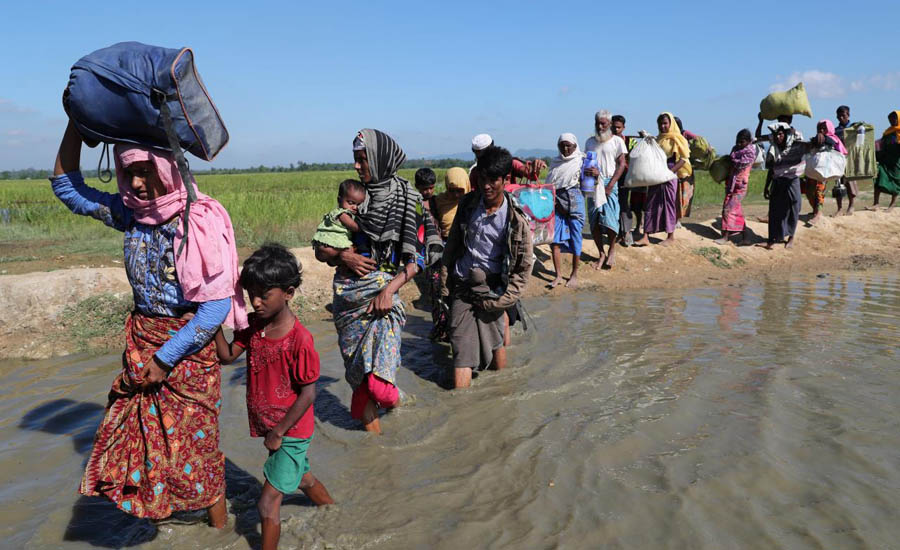 NAYPYITAW (Reuters) - China called for a ceasefire in Myanmar's Rakhine State so that Rohingya Muslim refugees can return from Bangladesh, proposing a three-stage approach to the crisis as diplomats from 51 mostly Asian and European countries gathered in Myanmar on Monday.

More than 600,000 Muslim Rohingya have fled to Bangladesh since late August driven out by a military clearance operation in Buddhist majority Myanmar's Rakhine State.

Amid a burgeoning humanitarian catastrophe, rights groups have accused the Myanmar military of committing atrocities, while foreign critics have blasted Aung San Suu Kyi, the Nobel peace prize winner who leads the country's less than two-year-old civilian administration, for failing to speak out more strongly.

On Monday, Suu Kyi opened a Asia-Europe Meeting for foreign ministers that had been scheduled to take place in Myanmar before the outbreak of the current crisis.

Speaking in Naypyitaw on Sunday having arrived from Dhaka, China's Foreign Minister Wang Yi said China believed Myanmar and Bangladesh could work out a mutually acceptable way to end the crisis.

"The first phase is to effect a ceasefire on the ground, to return to stability and order, so the people can enjoy peace and no longer be forced to flee," China's foreign ministry said in a statement citing Wang.

"With the hard work of all sides, at present the first phase's aim has already basically been achieved, and the key is to prevent a flare-up, especially that there is no rekindling the flames of war."

Visiting Myanmar last week, U.S. Secretary of State Rex Tillerson made many of the same points, but he also called for a credible investigation into reports of atrocities.

Once a ceasefire is seen to be working, Wang said talks between Myanmar and Bangladesh should find a workable solution for the return of refugees, and the final phase should be to work toward a long-term solution based on poverty alleviation.

Myanmar and Bangladesh officials began talks last month to settle a repatriation process for refugees, and Bangladesh's foreign minister expects to take those talks to the next level in coming days.

Speaking on the sidelines of the ASEM meeting, European Union foreign policy chief, Federica Mogherini, said: "we believe that stopping the violence, the flow of refugees and guarantee full humanitarian access to the Rakhine state, and safe, sustainable repatriation of refugees are going to be key."

Mogherini, who also visited Bangladesh over the weekend, said, "there's a real possibility of Myanmar and Bangladesh reaching a memorandum of understanding and agreement for the safe repatriation of refugees to Myanmar."

She said the European bloc was ready to help with the process.

It was unclear, however, whether a safe return was possible - or advisable - given that thousands of Rohingya women and children are still stranded on the beaches trying to flee hunger and instability in Rakhine.

Myanmar intends to resettle most refugees who return to Rakhine state in new “model villages”, rather than on the land they previously occupied, an approach criticized in the past by the United Nations as effectively creating permanent camps.

The refugee crisis erupted after the military launched a brutal counter-insurgency operation against the militants after attacks on an army base and 30 police posts in Rakhine on Aug. 25.

Myanmar's military has said that all fighting against the Rohingya militants died out on Sept.5.

The group behind those attacks, Arakan Rohingya Salvation Army (ARSA), had declared a one-month ceasefire on Sept.10, which was rejected by the Myanmar government. But there have been no serious clashes since.

The United States and other Western countries have become more engaged with Myanmar in recent years, since it began a transition to civilian government after nearly 50 years of military rule. Currently, there is a power sharing arrangement, whereby Myanmar's generals retain autonomy over defence, internal security and border issues.

China has close relations with both Myanmar and Bangladesh, and has long been a key player in lawless borderlands where rebel ethnic groups have fought Myanmar's government for decades. The conflict in those border regions have occasionally pushed thousands of refugees to seek shelter in China.

Since the Rohingya crisis, China has repeatedly expressed support for what it calls the Myanmar government's efforts to protect stability.