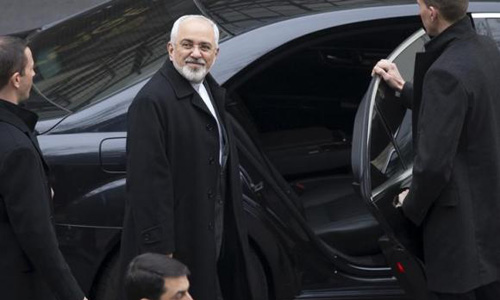 BEIJING - A nuclear deal with Iran represents the trend of the times and is the will of the people, Chinese Foreign Minister Wang Yi told his Iranian counterpart, pushing Iran once again to reach an agreement with major world powers. The negotiations between Iran and the United States, Russia, China, France, Germany and Britain face an initial deadline for a basic framework agreement at the end of March, and a June 30 deadline for a final settlement. "The Iran nuclear talks have reached the final sprint in the marathon," Chinese Foreign Minister Wang Yi told Iranian Foreign Minister Mohammad Javad Zarif in a telephone call, China's foreign ministry said in a statement issued late on Tuesday. "Reaching an agreement is the trend of the times and the will of the people, which accords with the joint and long-term interests of all sides, including Iran," Wang said. China will continue to play a constructive role, he said. Wang made a similar plea during a visit to Tehran last month. He told U.S. Secretary of State John Kerry earlier this month that talks on Iran's nuclear program must not fall at the last hurdle, and that all sides should meet each other half way. China and Iran have close diplomatic, economic, trade and energy ties. China's crude oil imports from Iran jumped by nearly 30 percent last year to their highest average level since 2011, as Iran's largest oil client boosted shipments after an interim deal eased sanctions on Tehran. - REUTERS