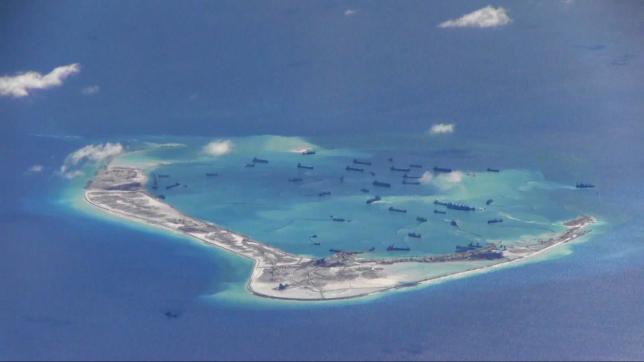 BEIJING – China's Defence Ministry denounced as gesticulation on Thursday speculation it would declare an air defense zone over the disputed South China Sea, after the United States said it had told China it would not recognize one. U.S. officials have expressed concern that an international court ruling expected in coming weeks on a case brought by the Philippines against China over its South China Sea claims could prompt China to declare an air defense identification zone, or ADIZ, as it did over the East China Sea in 2013. U.S. Deputy Secretary of Defense Robert Work said on Wednesday the U.S. would view such a move as "destabilizing" and would not recognize such an exclusion zone in the South China Sea, just as it did not recognize the one China established over the East China Sea. Ministry spokesman Yang Yujun, asked about Work's remarks, said any sovereign state had the right to set up an ADIZ. "On this, there is no need for other countries to gesticulate," Yang told a monthly news briefing. "Whether or not to or when to set up an air defense identification zone depends on whether there is an aerial threat or the level of aerial threat. It needs many considerations," he added, without elaborating. China claims most of the South China Sea, through which more than $5 trillion in global trade passes every year. China drew condemnation from Japan and the United States when it imposed its ADIZ, in which aircraft are supposed to identify themselves to Chinese authorities, above the East China Sea. The ministry's comments come as President Xi Jinping arrived in Washington for a nuclear security summit, where he will meet U.S. President Barack Obama. Tensions between China and its neighbors Vietnam, Malaysia, Brunei, the Philippines and Taiwan over sovereignty in the South China Sea have risen after Beijing embarked on significant land reclamations on disputed islands and reefs in the area. The United States has accused China of raising tension by its apparent deployment of surface-to-air missiles on a disputed island, a move China has neither confirmed nor denied. China, for its part, has accused the United States of militaristic the South China Sea through its freedom of navigation patrols in the region and the expansion of military alliances with countries such as the Philippines. Yang said this month's agreement between the United States and the Philippines allowing for a U.S. military presence at five Philippine bases represented "outdated Cold War thinking" which the United States should ditch. –Reuters