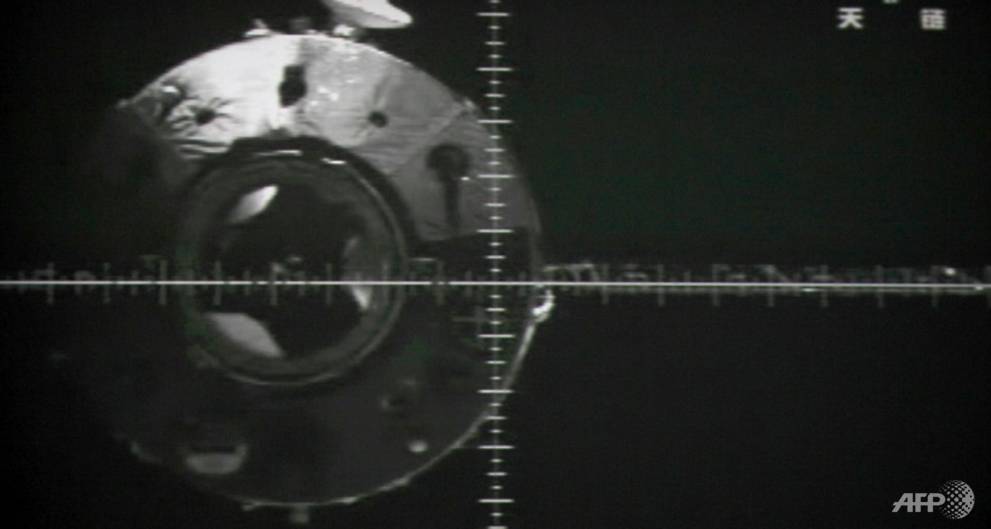 SHANGHAI (Reuters) - China’s Tiangong-1 space station re-entered the earth’s atmosphere and burnt up over the South Pacific on Monday, the Chinese space authority said. The “vast majority” of the craft burnt up on re-entry, at around 8:15 a.m. (0015 GMT), the authority said in a brief statement on its website, without saying exactly where any pieces might have landed. Brad Tucker, an astrophysicist at Australian National University, said the remnants of Tiangong-1 appeared to have landed about 100 km (62 miles) northwest of Tahiti. “Small bits definitely will have made it to the surface,” he told Reuters, adding that while about 90 percent would have burnt up in the atmosphere and just 10 percent made it to the ground, that fraction still amounted to 700 kg (1,543 lb) to 800 kg (1,764 lb). “Most likely the debris is in the ocean, and even if people stumbled over it, it would just look like rubbish in the ocean and be spread over a huge area of thousands of square kilometres.” China said on Friday it was unlikely any large pieces would reach the ground. The United States Air Force 18th Space Control Squadron, which tracks and detects all artificial objects in Earth’s orbit, said it had also tracked the Tiangong-1 in its re-entry over the South Pacific. It said in a statement it had confirmed re-entry in coordination with counterparts in Australia, Canada, France, Germany, Italy, Japan, South Korea and Britain. The 10.4-metre-long (34.1-foot) Tiangong-1, or “Heavenly Palace 1”, was launched in 2011 to carry out docking and orbit experiments as part of China’s ambitious space programme, which aims to place a permanent station in orbit by 2023. Decommissioning was originally planned for 2013 but the mission was repeatedly extended. Asked about the space station, Chinese foreign ministry spokesman Geng Shuang told a regular briefing he had no other information and reiterated that China had been reporting the situation to the U.N. space agency in an open and transparent way. “According to what I understand, at present there has not been found any damage on the ground,” he said, without elaborating. China had earlier said re-entry would happen in late 2017, but that process was delayed, leading some experts to suggest the space laboratory was out of control. Worldwide media hype about the re-entry reflected overseas “envy” of China’s space industry, the Chinese tabloid Global Times said on Monday. “It’s normal for spacecraft to re-enter the atmosphere, yet Tiangong-1 received so much attention, partly because some Western countries are trying to hype and sling mud at China’s fast-growing aerospace industry,” it said.