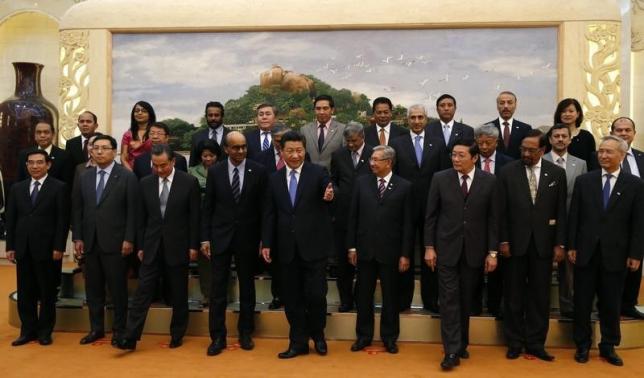 BEIJING - China welcomes Taiwan's decision to apply to join the Beijing-led Asian Infrastructure Investment Bank (AIIB) as long as the self-ruled island uses an appropriate name, state news agency Xinhua reported on Wednesday. China's Taiwan Affairs Office has received Taiwan's letter of intent to join and has passed it to the AIIB's interim secretariat, Xinhua cited Taiwan Affairs Office spokesman Ma Xiaoguang as saying. "The AIIB is open and inclusive," Ma said. "We welcome Taiwan to participate in the AIIB under an appropriate name." Most countries, including the United States, do not recognize Taiwan due to pressure fromChina. Taiwan is not a member of the United Nations, the World Bank or the International Monetary Fund. However it is a member of the Asian Development Bank under the name of Taipei,China. The United States has urged countries to think twice about joining the AIIB until it could show sufficient standards of governance and environmental and social safeguards. China views Taiwan as a renegade province and has not ruled out the use of force to bring it under its control. However, since Taiwan's current president Ma Ying-jeou took office in 2008, enmity has declined considerably and the two sides have signed a number of trade and investment deals. - Reuters