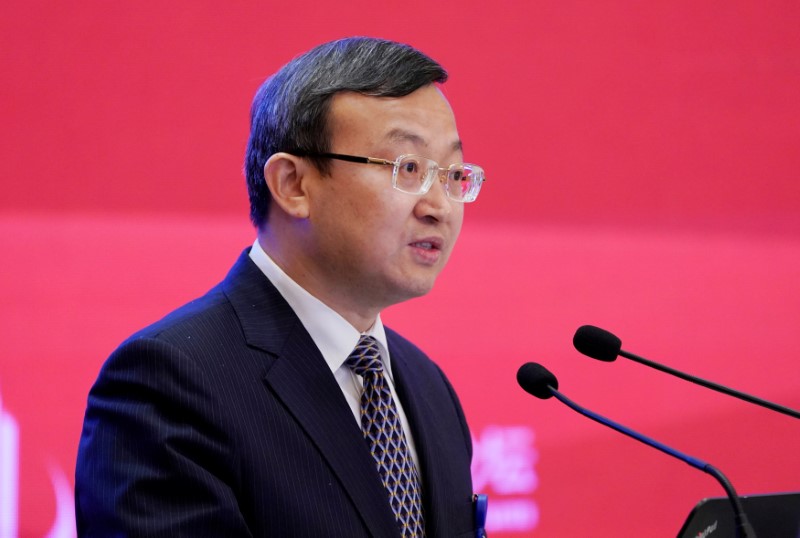 BEIJING (Reuters) - Trade talks between the United States and China should be equal and mutually beneficial, Chinese Vice Commerce Minister Wang Shouwen said on Friday, adding that he hoped the two countries can find ways to manage their differences through dialogue.
US President Donald Trump and his Chinese counterpart Xi Jinping are expected to hold talks during the G20 summit in Buenos Aires next week as trade ties between the world’s two largest economies become increasingly fraught. Wang, speaking at a press conference in Beijing, said he hoped both sides could move in the same direction and find ways to resolve their problems. Officials from both countries are in close contact under guidance from their leaders, he added. Washington wants Beijing to improve market access and intellectual property protections for US firms, cut industrial subsidies and slash a $375 billion trade gap. Trump has imposed tariffs on $250 billion of Chinese imports to force concessions. The U.S. tariff rate on $200 billion in Chinese goods is set to increase to 25 percent from 10 percent on Jan. 1. Trump has threatened to impose tariffs on all remaining Chinese imports - about $267 billion more in goods - if Beijing fails to address U.S. demands. Trump said on Thursday that he hoped he can make a deal with China when he meets Xi. “I can say this, China wants to make a deal very badly - because of the tariffs,” Trump told reporters in Palm Beach, Florida. “China wants to make a deal; if we can make a deal, we will,” he said. The high-stakes meeting comes as the Trump administration shows little sign of backing down in its demands and rhetoric. Washington said on Tuesday that China has failed to alter its “unfair” practices at the heart of the US-China trade conflict, in an update of the US Trade Representative’s “Section 301” investigation into China’s intellectual property and technology transfer policies. China rejected the fresh US accusations of perpetuating “unfair” trade practices and urged Washington to stop making provocations. The Chinese commerce ministry said on Thursday that it was deeply concerned by the report issued by the US administration this week. Citing security concerns, the US government on Monday also proposed stepping up scrutiny over technology exports in 14 key high-tech areas including artificial intelligence and microprocessor technology, a move that many analysts view as directly targeting China. A 30-day public consultation period on the proposal to include those sectors in its broader export control regime is underway and will end on December 19, according to a document published on the US government’s Federal Register.