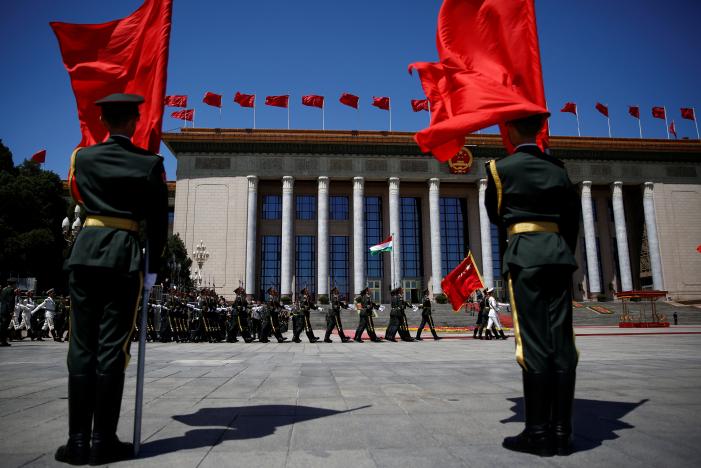 BEIJING – China welcomes all countries to participate in this weekend's forum on China's new Silk Road plan, the Foreign Ministry said on Saturday, after the United States warned China that North Korea's attendance could affect other countries' participation.

Two sources with knowledge of the situation said the US embassy in Beijing had submitted a diplomatic note to China's foreign ministry, saying that inviting North Korea sent the wrong message at a time when the world was trying to pressure Pyongyang over its repeated missile and nuclear tests.

The spat over North Korea threatens to overshadow the summit, China's most important diplomatic event of the year for an initiative championed by Chinese President Xi Jinping.

Asked about the US note, China's Foreign Ministry said in a short statement sent to Reuters that it did "not understand the situation".

The statement added: "The Belt and Road initiative is an open and inclusive one. We welcome all countries delegations to attend the Belt and Road Forum for International Cooperation".

The ministry did not elaborate. It said on Tuesday that North Korea would send a delegation to the summit but gave no other details.

Delegates will hold a series of sessions on Sunday afternoon to discuss the plan in more detail, including trade and finance. China has given few details about attendees.

Leaders from 29 countries will attend the forum in Beijing on May 14-15, an event orchestrated to promote Xi's vision of expanding links between Asia, Africa and Europe underpinned by billions of dollars in infrastructure investment.

China has rejected criticism of the plan and the summit, saying the scheme is open to all, is a win-win and aimed only at promoting prosperity.

In an English-language commentary on Saturday, China's state-run Xinhua news agency said the new Silk Road, officially called the Belt and Road initiative, would be a boon for developing countries that had been largely neglected by the West.

"As some Western countries move backwards by erecting 'walls,' China is contriving to build bridges, both literal and metaphorical. These bridges are China's important offering to the world, and a key route to improving global governance," it said.

Despite Chinese anger at North Korea's repeated nuclear and missile tests, China remains the isolated state's most important economic and diplomatic backer, even as Beijing has signed up for tough UN sanctions against Pyongyang.

China has over the years tried to coax North Korea into cautious, export-oriented economic reforms, rather than sabre rattling and nuclear tests, but to little avail. –Reuters