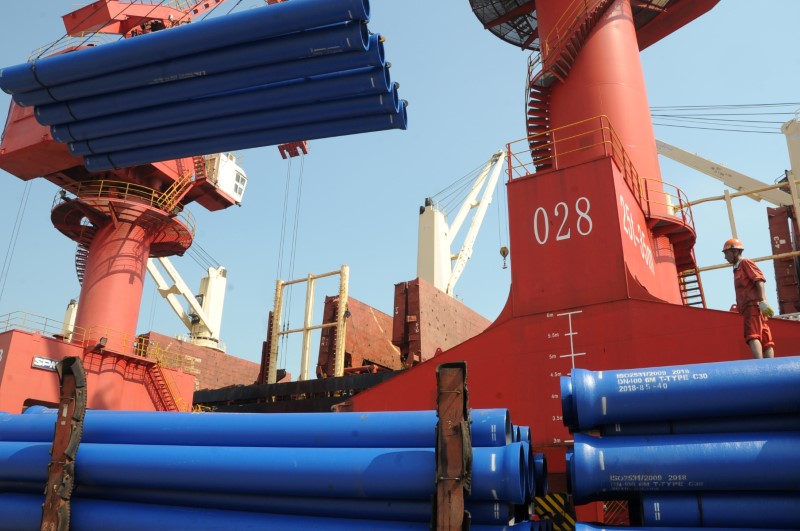 BEIJING (Reuters) - China’s economic growth slowed as expected in the second quarter as the  efforts to tackle debt risks crimp activity and an intensifying trade war with the United States threatens to knock exports. The economy grew 6.7 percent in the second quarter from a year earlier, cooling slightly from the first quarter, the National Bureau of Statistics said on Monday. Activity data for June also indicated slowing momentum, backing views that growth is cooling, with some analysts calling for the government to take stronger measures to support the economy. “They need to slow financial deleveraging slightly and to turn their focus more on growth-supportive measures, for example increasing liquidity through (bank reserve requirement) cuts,” said Iris Pang, Greater China Economist at ING in Hong Kong. “If the situation gets worse a lot faster than what we expect I do think Chinese authorities need to beef up supportive measures, both fiscal and monetary.” First half fixed asset investment growth was a record low, while industrial output for June matched the slowest growth rate in over two years at 6.0 percent and missed forecasts centered on 6.5 percent expansion. Analysts polled by Reuters had expected the economy to expand 6.7 percent in the April-June quarter. On a quarterly basis, growth picked up 1.8 percent from 1.4 percent in the first quarter, beating expectations of 1.6 percent growth. The world’s second largest economy has already felt the pinch from a multi-year crackdown on riskier lending that has driven up corporate borrowing costs, prompting the central bank to pump out more cash by cutting reserve requirements for lenders. Data on Friday showed China’s exports grew at a solid pace in June, though analysts suggest front-loading of shipments ahead of tariffs taking effect may have boosted the figures. More worryingly, the trade surplus with the United States hit a record high last month and looks set to keep a bitter tariff dispute with Washington on the boil for a while longer. The administration of US President Donald Trump has raised the stakes in its trade row with China, saying it would slap 10 percent tariffs on an extra $200 billion worth of Chinese imports, including numerous consumer items. Other data showed retail sales rose 9.0 percent in June from a year earlier, in line with market forecasts. Faced with a slowdown in domestic demand and the potential fallout from the trade war, Chinese policymakers have started to step up policy support for the economy and have softened their stance on deleveraging. China’s economy is likely to experience a mild slowdown in the second half of the year as financial market risks become “obvious” and demand is expected to decline, official think tank State Information Center (SIC) recently said. The nation’s financial regulator has told banks to “significantly cut” lending rates for small firms in the third quarter in comparison with the first quarter, two people with direct knowledge of the matter told Reuters last week. The People’s Bank of China, which has cut banks’ reserve requirements three times this year, has recently replaced its use of the term “deleveraging” with “structural deleveraging”, a change that suggests less harsh curbs on debt. Nomura economists said in a recent note they expected the PBoC to deliver at least one more RRR cut before year-end, likely by 100 basis points and increase direct funding to the real economy via other liquidity injection tools, such as the supplementary lending facility.