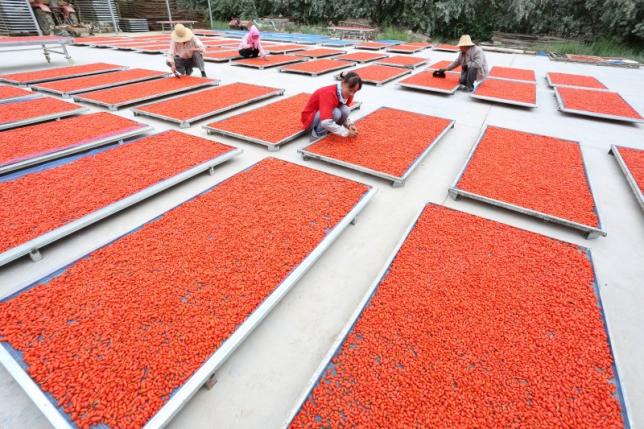 BEIJING - China's economy expanded slightly faster than expected in the second quarter but private investment growth shrank to a record low, suggesting future weakness which could pressure the government to roll out more support measures. Property investment, which has given the world's second-largest economy a welcome boost in recent months by spurring demand for products from cement to steel, also showed signs of fatigue in June, with growth cooling for a second month. While fears of a hard landing have eased, investors worry a further slowdown in China and any major fallout from Brexit would leave the world even more vulnerable to the risk of a global recession. China's economy grew 6.7 percent in the second quarter from a year-ago, unchanged from the first quarter but still the slowest pace since the global financial crisis, data showed on Friday. Analysts had expected it to dip to 6.6 percent. Growth in investment by private firms, which accounts for over 60 percent of total investment, fell to a new record low in the first half of the year, as businesses retrench in the face of the sluggish economic outlook and weak exports. "While there was a big pick-up in retail sales, the slowdown in fixed-asset investment is a worry. Given the slide in fixed-asset investment growth, I'm inclined to keep my forecast of slowing growth over the course of the year," said Tim Condon, chief economist for Asia at ING in Singapore. Fixed asset investment growth in the first half slowed to 9 percent, the weakest since March 2000. "We think GDP growth is likely to slow in Q3 and may rebound in Q4 driven by post-flood reconstruction activity. But the rebound will not last long," said Nomura economist Wendy Chen. China's statistics bureau said the economy still faces downward pressure, but added that first-half performance lays a good foundation for achieving the government's full-year growth target of 6.5-7 percent, which some market watchers believe is ambitious. "Solid GDP in Q2, which is likely to have been led by property and construction, is unlikely to be sustained. Property investment grew 6.1 percent in the first six months, lower than 7.0 percent in January-May. Therefore, the property-led recovery has ended," economists at ANZ said in a note. Indeed, Zoomlion Heavy Industry (1157.HK), a major Chinese construction equipment maker, warned investors on Friday that its first-half net loss would more than double due to weak demand for construction machinery. GOVERNMENT EXPECTED TO DO MORE Policymakers have said the economy remains largely steady, but with private investment shrinking the government has had to do more of the heavy lifting to support growth, adding to worries about the country's mounting debt levels and delays in reforming the bloated and inefficient state sector. State firms hiked investment 23.5 percent in the first half, and government spending rose 19.9 percent in June. That spending spree and higher commodity prices have benefited long-ailing manufacturers. Industrial output growth rose to 6.2 percent in June from a year earlier, beating expectations for a marginal easing. Retail sales growth also accelerated to 10.6 percent, easily beating expectations, while Chinese banks extended more loans than expected, driven largely by mortgage demand. A pickup in consumption and the services sector is one bright spot for Beijing's efforts to rebalance the economy away from its past reliance on investment and exports. Final consumption accounted for 73.4 percent of China's first-half economic growth, compared to 66.4 percent last year. "The economic structure continues to improve, the share of the services sector continues to increase. This trend should continue," said Nomura's Chen. Chinese leaders are trying to support growth to prevent widespread job losses and debt defaults, but they are also facing pressure to push through painful structural reforms such as reductions in industrial overcapacity that would put the economy on a more balanced and sustainable footing. The economy grew 6.9 percent in 2015, its slowest rate in 25 years, though many analysts believe real growth rates are much weaker than official data suggest. China's exports fell more than expected in June as global demand remained stubbornly weak, while imports also shrank more than forecast, suggesting the impact of a flurry of earlier stimulus measures may already be fading. Shocks from Brexit could hurt one of China's biggest export markets and spark more swings in its financial markets. Shanghai stocks are still struggling after a crash last year, while the yuan has slid to 5-1/2 year lows, rattling global investors. -Reuters