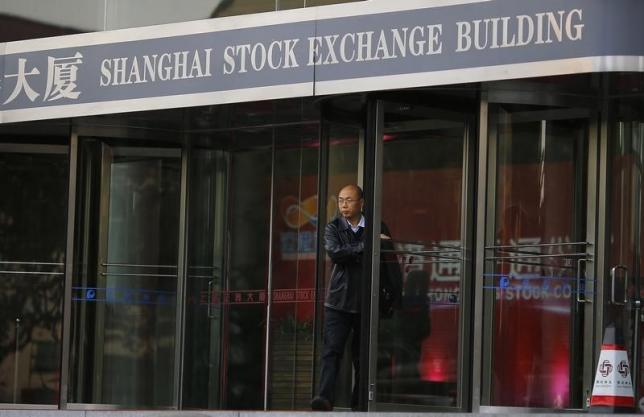 SYDNEY - Chinese shares extended their meteoric ascent to reach new heights on Tuesday, while much of the rest of Asia took a breather after recent hefty gains. A surprise decision by Singapore's central bank not to ease policy gave a boost to emerging currencies in the region and prompted profit-taking on crowded positions in the US dollar. In contrast, China's central bank continued to slowly relax its policy by guiding short-term money market rates lower for the fifth time since the Lunar New Year in February. The Shanghai Composite added another 1.0 percent after climbing almost uninterrupted for more than five weeks now. Hong Kong's main index, which touched a seven-year high on Monday and rose 12 percent in the past five sessions, was down 0.5 percent. MSCI's broadest index of Asia-Pacific shares outside Japan was a fraction softer at 513 and not far from September's peak of 516. A break there would take it to ground last trod in early 2008. Japan's Nikkei dithered around 19,900, having struggled to sustain a break above the 20,000 barrier. On Wall Street, investors had fretted that a strong dollar would constrain earnings at multinational corporations. The Dow ended Monday down 0.45 percent, while the S&P 500 dropped 0.46 percent and the Nasdaq 0.15 percent. Estimates for first-quarter S&P 500 results have fallen sharply since Jan. 1, with earnings for the period expected to have declined 2.9 percent from a year ago, Thomson Reuters data showed. Eyes are also on US retail sales data due later Tuesday for evidence that spending is picking up after a sluggish start to the year. An upbeat result would add to the case for rate hikes from the Federal Reserve later this year, and support the dollar. On Tuesday, the US currency backtracked a little after a jump in the Singapore dollar caught the market long. Against a basket of major currencies, the dollar dipped 0.1 percent to 99.392 but was still not far from recent peaks. The euro edged up to $1.0570, having fallen as low as $1.0519 on Monday. The yen made gains of its own after Koichi Hamada, an economic adviser to Japan's Prime Minister Shinzo Abe, indicated the yen was excessively weak against the dollar. The dollar was down at 119.83 yen, from an early 120.10, while the euro languished at 126.78 yen after reaching lows not seen since June 2013. In commodities, oil prices rose after the US Energy Information Administration said it expected US shale oil output to record its first monthly decline in over four years. US crude was quoted 46 cents firmer at $52.38, while Brent May crude added 48 cents to $58.39. - Reuters