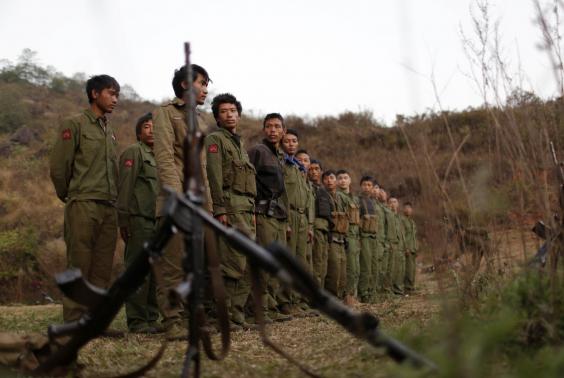 BEIJING -  China's military will take "decisive" measures if there is a repeat attack byMyanmar forces on Chinese territory, a senior military officer said after a bomb from aMyanmar aircraft fell in Chinese territory and killed four Chinese people. Myanmar government forces have been battling rebels on the border with China since last month and China has urged Myanmar to "lower the temperature". But Myanmar denied that any bomb from its forces had fallen in China and said the rebels might have fired into China to create "misunderstanding". The rebels do not have aircraft. China's air force has already dispatched aircraft to patrol the border and step up protection of China's airspace. China has also summoned Myanmar's ambassador to complain about the bombing. Fan Changlong, who is a deputy head of the powerful Central Military Commission, said Myanmar air force aircraft had crossed the border "many times" recently, China's defense ministry said in a statement late on Saturday. "The Myanmar side must recognize the seriousness of the issue, seriously deal with this incident, punish those who caused the trouble, apologize and pay compensation to family members, and explain themselves to China," Fan was cited as telling Myanmar's military in an emergency telephone call. Myanmar must take strict steps to rein in their armed forces to ensure no repeat of such incidents, he said. "Otherwise, China's military will take resolute and decisive measures to protect the lives, property and security of China's people," Fan said, without elaborating. Tens of thousands of people, many of them ethnic Chinese, have fled the fighting in northeastern Myanmar's Kokang region into China. Myanmar has said Chinese mercenaries were fighting with the rebels, and it has urged China to cooperate to prevent "terrorist attacks" being launched from Chinese territory. China has denied that any attacks into Myanmar have been launched from its territory. The rebels are from a group called the Myanmar National Democratic Alliance Army, which is led by ethnic Chinese commander Peng Jiasheng. The MNDAA was formed from remnants of the Communist Party of Burma, a powerful China-backed guerrilla force that battled the Myanmar government until it splintered in 1989. The group struck a truce with the government which lasted until 2009, when government troops took over their region in a conflict that pushed tens of thousands of refugees into China's Yunnan province. China and Myanmar share a 2,000 km (1,250 mile) border, much of it remote and hard to access. – Reuters