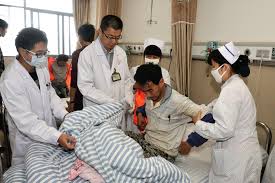 BEIJING - China will expand medical insurance to cover all critical illnesses for all urban and rural residents by the end of the year, the cabinet said on Sunday, the latest step in a plan to fix a healthcare system that has sparked public discontent. The State Council said 50 percent of the medical costs will be covered by insurance in a bid to "more effectively reduce the burden of medical expenses", in a statement posted on the government's website. President Xi Jinping's government has touted access to affordable healthcare as a key platform of his administration, underscoring the importance of meeting the needs of the nearly 1.4 billion people, many of whom have often complained of large out-of-pocket expenses due to low levels of insurance coverage. Many people say the cost of serious illnesses such as cancer and diabetes can bankrupt households under the current system. The aim of expanding health insurance was to "effectively alleviate poverty caused by illness" and to build a strong universal healthcare system, the State Council said. Since 2009, China has spent 3 trillion yuan ($480 billion) on healthcare reform, but the system still struggles with a scarcity of doctors, attacks by patients on medical staff and a fragmented drug distribution and retail market. Economists say it is crucial for China to improve the quality of its healthcare if it wishes to remake its economy and boost domestic consumption. They say a stronger safety net will encourage Chinese to spend more and save less. China's healthcare spending is set to hit $1 trillion by 2020, up from $357 billion in 2011, according to McKinsey & Co, attracting a rapid inflow of money from private insurers, hospital operators and other investors. -Reuters