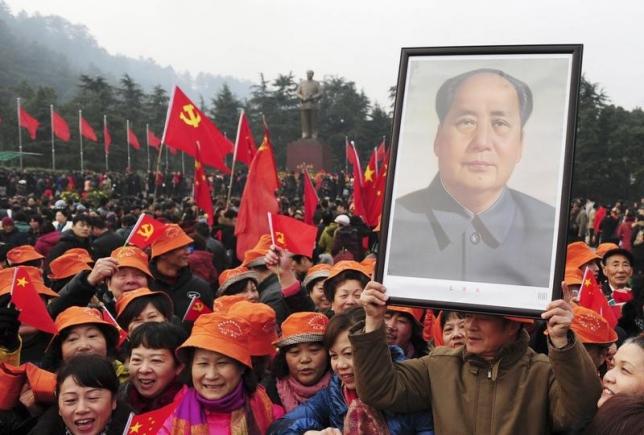 BEIJING - China's main state broadcaster, CCTV, will investigate one of its anchors after a video of him insulting the founder of modern China, Mao Zedong, went viral on social media sites. Mao, who died in 1976, remains a divisive figure. His image adorns banknotes and his embalmed body attracts hundreds, if not thousands, of visitors a day to Beijing. While the ruling Communist Party has acknowledged Mao made mistakes, there has yet to be an official accounting for the chaos of the Cultural Revolution or the millions of deaths from starvation during the 1958-61 Great Leap Forward. In a brief statement released on its website late on Wednesday, CCTV said the remarks of its anchor Bi Fujian "had a serious social impact". "We will seriously handle the matter in line with related regulations and based on careful investigation," it said without elaborating. In the video, which is still circulating on social media sites, Bi sings parts of a Cultural Revolution-era opera called Taking Tiger Mountain by Strategy, and then inserts his own comments, including that Mao lead the people to misery. Mao has also become a potent symbol for leftists within the Communist Party who feel that three decades of market-based reform have gone too far, creating social inequalities like a yawning rich-poor gap and pervasive corruption. The Global Times, a popular tabloid published by the Communist Party's official People's Daily, said that Bi, 56, was known for hosting a talent show on CCTV. He has also hosted CCTV's Chinese New Year's special since 2011, it added. The network is viewed by the government as an enormously influential and useful propaganda tool abroad, and at home where authorities keep a tight rein on domestic media. However, CCTV has faced allegations of corruption, and its staid format and repetitive programming means it has struggled to win over a younger audience which can easily access online racier content from Hong Kong, Taiwan, South Korea and the United States. - Reuters