China, US talks 'extremely productive' ahead of G20 as trade issues loom 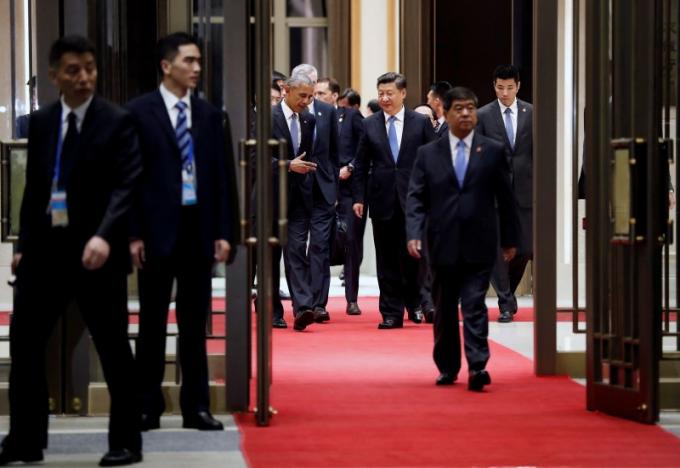 China, US talks 'extremely productive' ahead of G20 as trade issues loom

HANGZHOU - US President Barack Obama said on Sunday bilateral talks with China's Xi Jinping had been "extremely productive", as world leaders gathered for a G20 summit expected to address sluggish global economic growth and the looming specter of protectionism. Some G20 leaders have already begun drawing battle lines in disputes over issues like trade and investment, tax policy, and industrial overcapacity. Security is extremely tight in Hangzhou, with parts of the city of 9 million people turned into a virtual ghost town as China seeks to ensure that the G20 summit is incident-free. Obama, who arrived on Saturday, held talks with Xi that ran late into the night. He urged Beijing to uphold its legal obligations in the disputed waters of the South China Sea, and stressed US commitments to its regional allies. Xi said China would continue to safeguard its sovereignty and maritime rights in the South China Sea. Obama brushed off his chaotic welcome at the Hangzhou airport where his staff argued with Chinese security over media access. He was also not offered a staircase to disembark at the front of Air Force One, and staffers had to scramble to find an alternative exit. "The bilateral discussions that we had yesterday were extremely productive and continue to point to big areas of cooperation," Obama told reporters on Sunday, saying he wouldn't "over-crank" the significance of the airport row. On Saturday, Obama and Xi also ratified the Paris climate change agreement, setting the stage for other countries to follow and for the deal to come into effect possibly as early as before the year-end. China is keen to keep the summit focused on economic issues and to prevent other disputes from overshadowing it. Other leaders arriving for the summit in the eastern Chinese city of Hangzhou include Russia's Vladimir Putin, Japan's Shinzo Abe, Britain's Theresa May, Germany's Angela Merkel, France's Francois Hollande and India's Narendra Modi. The leaders are likely to renew their promises to use tax and spending policies to invigorate the sluggish world economy, although a new pro-growth push was unlikely. Overcapacity in the global steel industry, a sore point for China as the world's largest producer of the metal, barriers to foreign investment and the risk of currency devaluations to protect export markets will also figure in the discussions. With the summit tucked in between Britain's vote to leave the European Union and the US presidential election, G20 leaders will also be keen to mount a defense of free trade and globalization. BATTLE LINES On Sunday, Xi held talks with Australian Prime Minister Malcolm Turnbull and told him he hoped Australia would continue to provide a fair, transparent and predictable policy environment for foreign investors. China was angered when Australia blocked the A$10 billion ($7.7 billion) sale of the country's biggest energy grid to Chinese bidders last month. China has accused Australia of bowing to protectionist sentiment in blocking the bid for Ausgrid, as well as an earlier one by a China-led consortium to buy cattle company Kidman & Co. Beijing has also criticized Australia, a staunch US ally, for running surveillance flights over disputed islands in the South China Sea. Meanwhile, European Commission President Jean-Claude Juncker said on Sunday China must set up a mechanism to address its problem of industrial overcapacity, saying it was "unacceptable" the European steel industry had lost so many jobs in recent years. "Overcapacity is a global problem but there is a particular Chinese element," he told a news conference. Britain's future after its departure from the European Union was also subject to discussion. Juncker said that if Britain wanted access to the European Union's common market, it needed to respect the rules of the common market. Turnbull, meanwhile, said Australia wanted an early free trade agreement with Britain so markets could remain open between them when Britain formally left the European trading bloc. Obama, now in the last five months of his presidency, wants to put a final stamp on his signature policy shift toward the Pacific, setting the tone for his White House successor, who will be elected in November and take office on Jan. 20. He has invested in developing closer ties with nations in Southeast Asia, and is taking pains in his last scheduled trip to the region to reassure partners worried about the economic and military might of China. An arbitration court in The Hague ruled in July that China had no historic title over the waters of the South China Sea and had infringed on the rights of the Philippines, which brought the case under the UN Convention on the Law of the Sea. Beijing rejected the ruling and accused the United States of stirring up trouble in the sea where China's territorial claims overlap in parts with Vietnam, the Philippines, Malaysia, Brunei and Taiwan. -Reuters