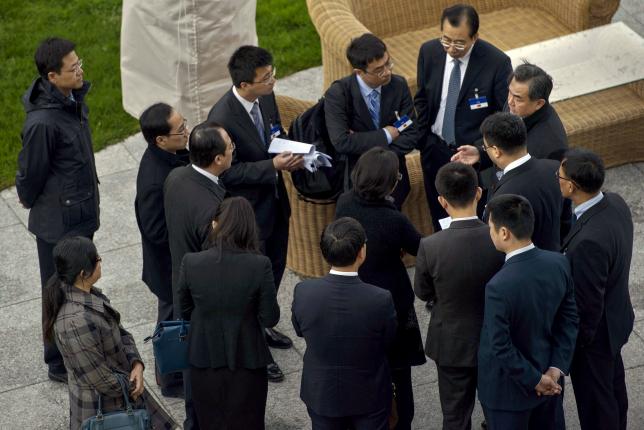 LAUSANNE, SWITZERLAND - China warned on Wednesday that if the talks are stuck then all previous efforts to resolve Iran's nuclear standoff with the six major powers will have been wasted and called for compromise. "It is important to give political guidance to the negotiations ... it is important to narrow down the differences," said the rare statement issued by the Chinese delegation a day after Foreign Minister Wang Yi left Lausanne. "If the negotiations are stuck, all previous efforts will be wasted. All parties must be prepared to meet each other half way to reach an agreement." The powers and Iran will meet again later on Wednesday in a bid to reach an outline accord reining in Tehran's nuclear program, after failing to agree crucial details such as the lifting of UN sanctions by a Tuesday midnight deadline. The preliminary deal would be a major milestone toward a final accord, with an end-June deadline, that could end a 12-year standoff and reduce the risk of another Middle East war. "The remaining key issues are linked to each other. The parties must think creatively and work out a package solution," the Chinese statement said. Wang also underlined the vitally important role of the United Nations Security Council. "I wish to emphasize that no agreement is possible without accommodating the core concerns of the various parties," it said. Wang flew back to Beijing on Tuesday, leaving his deputy at the negotiations in the Swiss city of Lausanne. -  Reuters