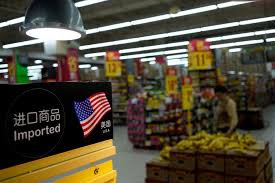 BEIJING (Reuters) - China’s commerce ministry said on Thursday the United States is “opening fire on the entire world”, warning that Washington’s proposed tariffs on Chinese goods will hit international supply chains, including foreign companies in the world’s second-largest economy.
China will continue to assess the impact of the trade dispute and will help firms cope with possible shocks, Gao Feng, the ministry spokesman told reporters in a regular briefing. “US measures are essentially attacking global supply and value chains,” Gao said. “To put it simply, the U.S. is opening fire on the entire world, including itself.” The comments come a day before Washington and Beijing pan to implement tariffs against each others’ goods amid an escalating trade conflict that has roiled financial markets. Gao told reporters that China’s foreign trade is expected to continue on a stable path in the second half, though investors fear a full-blown Sino-US trade dispute will deal a body blow to Chinese exports and its economy. In a statement, China’s customs agency said Chinese tariffs on US goods will take effect immediately after US tariffs on China goods kick in. Washington has said it would implement tariffs on $34 billion of Chinese imports on July 6, and Beijing has vowed to retaliate in kind on the same day though it has said it will not be the first to pull the trigger. European officials have told Reuters that China has put pressure on the European Union to issue strong joint statement against US President Donald Trump’s trade policies.. Chinese stocks were mixed while the yuan slipped slightly against the dollar in early Thursday trade as a targeted cut of reserve requirements for banks took effect amid heightened the trade tensions.