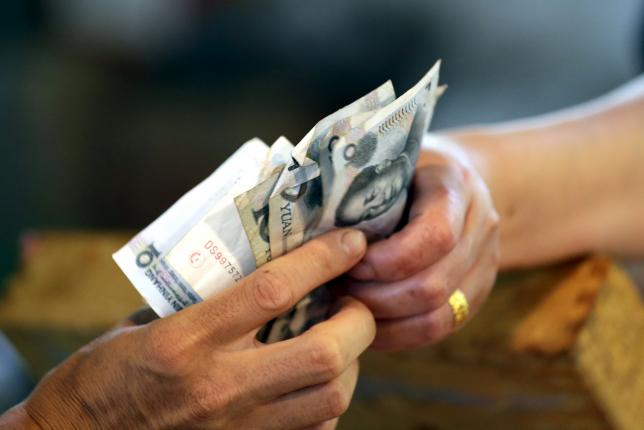 BEIJING - China's move to weaken the yuan last week could head off further similar "adjustments", and the yuan is likely to move in both directions as the economy stabilizes, Ma Jun, chief economist at the central bank said on Sunday. The People's Bank of China (PBOC) shocked global markets by devaluing the yuan CNY=CFXS by nearly 2 percent on Aug. 11. The PBOC called it a free-market reform but some saw it as the start of a long-term yuan depreciation to spur exports. The yuan's drop last week and its increased flexibility could help "sharply reduce the possibility" of similar adjustments in future, Ma said. In the near term, it is more likely there will be "two way volatility," or appreciation and depreciation of the yuan, Ma said in a question-and-answer statement sent by email. The central bank would move only in "exceptional circumstances" to iron out "excessive volatility" in the exchange rate, Ma said. Ma played down market fears that a "currency war" could be triggered by China's devaluation, which dragged some other Asian currencies to multi-year lows. "China has no intention or need to participate in a 'currency war'," Ma said in the statement. "There is no need to worry" that the central bank will continue to intervene in the market to support the yuan as China's economy stabilizes, Ma said. "In the future, even if the central bank needed to intervene in the market, it may be in either direction," he added. Ma also said that he expected the economy to grow around 7 percent this year - in line with the government's target. -Reuters